The K’ekchi of northeastern Guatemala and southern Belize number about one million and are one of the more than 21 indigenous groups of Mayan descent in Central America. Living in the hilly highlands and tropical jungles, they are mainly subsistence farmers with a long history of oppression at the hands of the Spanish conquistadores and the modern-day landlords. As the third largest indigenous group in Guatemala, the K’ekchi have been able to maintain a stronger cultural and language identity than many of the smaller and more urbanized groups.

Eastern Mennonite Missions workers arrived in the K’ekchi area in 1968 and began the slow process of learning the language and culture.1 Overcoming the suspicion of foreigners and gaining acceptance into the community did not happen quickly. As they developed relationships with their neighbors and learned to know the needs of the area, they initiated projects in agricultural development, health, and education. Much time was spent accompanying their friends in the traditional corn planting celebrations and other community events. It was not until 1972 that the first believers were baptized, marking the beginning of a church-planting movement that has now grown to 125 congregations.

It did not take long to learn that the K’ekchi are very much aware of the spirit world. Their primal worldview is one in which the primary spirits are embodied in the mountains and hills that surround their traditional habitat. Long, frequent, and fervent prayers were a part of their daily life long before the missionaries came. They can be heard praying aloud when they awake in the morning and before sleeping at night. The 500 years of interface with Catholicism has left them with an expression of syncretism that makes it common to hear references to Jesus, Holy Mary, and the local mountain god all in the same prayer. They pray for permission to engage in whatever activity they are about to begin so as not to offend the spirits that care about that activity. They pray for protection from the unpredictable and often malevolent spirits that linger in their environment.

Missionaries have learned much and have been deeply humbled by the K’ekchi’s keen awareness of the spiritual and by their religious fervor. I remember the day a young man said to me, the missionary, “Brother, don’t you think we should pray before we begin this activity?” Or the time a pastor said to my wife, who is a nurse, “Sister, when we visit the sick, please do not start asking questions about the medical condition of the person until after we have prayed.” Who indeed are the true spiritual leaders here?

The Gospel Message and the K’ekchi Worldview View of Creation

“I lift up my eyes to the hills.” Yes, the K’ekchi do that every day. It is to the hills that they pray. It is in the caves in the hills that the most sacred spots are found and the most important prayers are prayed. It is on the hills that corn, the source of life, is planted. It is indeed to the hills where they look for their help. But Psalm 121 goes on: “Where does my help come from? My help comes from the Lord, the Maker of the heaven and the earth.” The K’ekchi believers claim this Psalm as one that was written for them. The fact that they can now know the Creator of their precious hills has taken them beyond the fear of the unpredictable with which they used to live. The Creator of the hills is good and “will keep them from harm and will watch over them.” This fact leads them to worship and be thankful in a way that they never experienced before.

The respect for nature and creation that comes from the primal worldview has some positive aspects, but in my view it is based on fear as much as on true respect. From my perspective, the Biblical view of creation, for example, provides a much more viable basis for respect for creation. The current reality in Central America, as in many places in the world, is that neither primal nor biblical worldviews (if we can call it that) have provided the necessary resources for a consciousness of caring for the environment. As everywhere, the church among the K’ekchi needs to continually emphasize that we have a good God who has created a good world and has commissioned us to care for it.

Corn planting is the most sacred and celebrated time of the year. Along with feasting and drinking, animal sacrifices and complex ceremonies are performed to appease the god of the hills. So how do believers plant corn? At the beginning of corn-planting season, believers participate in a great feast as they have always done. Now, however, instead of the ceremonies and drinking, they have a joyous time of prayer and worship. They ask the Creator God to bless the seeds, to bring the needed rain, and to keep the wild animals from eating their crops.

In the traditional worldview illnesses are caused by spiritual forces. Either someone did something wrong or they did not do something they should have done. A sickness can be placed on someone by others who wish to do them harm. Even after years of being Christian believers, many K’ekchi retain a view of sickness that is unfamiliar to those with a more secular/scientific view. Christian medical personnel and pastors among the K’ekchi have learned that it is most helpful to try to discover why the person believes he or she is sick. This inquiry is important because if one treats a person with modern medicine for an illness he or she believes has a spiritual source, the person most likely will not cooperate with the treatment and not be cured.

It is not uncommon for a person to confess a belief that the sickness came from a fear, a broken relationship, an angry outburst, or another problem in his or her life. This provides an excellent opportunity to counsel and pray with the person about these issues. In a case like this, the K’ekchi may be closer to biblical view of the whole person than those of us who default to treating every symptom with medicine.

One effective approach used by many local pastors, especially when a person believes he or she is under a curse, has been to neither acknowledge nor deny the reality of the person’s belief regarding the source of the sickness. Instead they affirm that God is more powerful than whatever it is that has made them sick. It is God’s power that heals sicknesses, and just as the traditional healers use herbs and incantations, God may “borrow” the doctor and his medicine to help heal the sick. The pastor then prays with the person on a regular basis while at the same time helping them and encouraging them to seek medical attention. They pray expecting that the God who loves them will hear them. Jesus said, after all, “Ask and you will receive.” Testimonies of healings and other miracles are very common.

In conclusion, our work among the K’ekchi has included many errors and misguided efforts, but as we have tried to humbly walk among them, the Holy Spirit has raised up a vibrant body of believers who are interpreting the gospel in their own context. We have been here through years of war, oppression, and conflict. By necessity, we have not been active in the political issues that have been affecting the K’ekchi people. But by our presence and activities, we have attempted to empower them to be leaders and to be involved in the issues that affect their lives. During our time, many local communities that were once controlled by oppressive landlords are now under indigenous leadership and ownership. Many pastors and leaders of the church who have had training in conflict resolution are often on the forefront in efforts to resolve local conflicts in their communities.

The story of God working among the K’ekchi, which began in ages past, will continue. It is humbling to have been here for a season to walk with them in that journey. My prayer is that they will continue to discover what it means to live out the life of Jesus in their context and to be faithful to his call.

We have been blessed to spend the last 20 years in Alta Verapaz, Guatemala, learning the language and culture of the K’ekchi people group. We work with the K’ekchi Mennonite Church, which was started more than 40 years ago by missionaries sent by Eastern Mennonite Missions in Salunga, Pennsylvania. The church currently consists of 126 congregations and approximately 10,000 members. The church serves its community through the Bezaleel Education Center, which is a high school with 170 boarding students and a health program that provides basic health care to several hundred rural villages. Our role is to walk with the leaders that God is raising up among his people here. That means mentoring some, teaching some, praying with some as we carry them in our hearts and learn with them what it means to walk with Jesus in this part of the world. 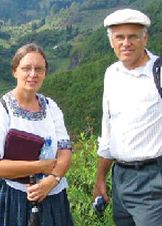 Originally from Lewisburg, Pennsylvania, the Groffs have been blessed to spend the last 20 years in Alta Verapaz, Guatemala, learning the language and culture of the K’ekchi people group. They work with the K’ekchi Mennonite Church, which was started more than 40 years ago by missionaries sent by Eastern Mennonite Missions. The church currently consists of 126 congregations and approximately 10,000 members. Galen and Phyllis have three children and four grandsons.