“Everyone who does not abide in the teaching of Christ, but goes beyond it, does not have God; whoever abides in the teaching has both the Father and the Son. Do not receive into the house or welcome anyone who comes to you and does not bring this teaching; for to welcome is to participate in the evil deeds of such a person.” –2 John 9-11 (NRSV)

This was the chapter and verse shot back at me by a prominent church member in our Bible study group (composed mainly of Keralite Pentecostal Christians who have their roots in the state of Kerala, India) in response to my introduction to a new topic of study: how to respond and interact with people of other faiths from a Christian perspective. This response, coming so early in our discussion, demanded a strong rationale for my proposed topic of study. For, if the Scripture gave the imperative that one ought not to receive or welcome a person who did not acknowledge “the teaching of Christ,” then what was the value of interacting or building relationships with persons of other faiths? What could be gained from studying other religions and dialoguing with someone from another faith whom the same chapter calls a “deceiver” and “antichrist”?

While the academy breaks new ground and reaches new frontiers in interfaith dialogue (IFD), in my observation, many Christians, especially in the Pentecostal tradition, have not been convinced of the value, much less the need, for such an exercise. In comparison with other Christian traditions, Pentecostals have not been the greatest of interfaith dialoguers. Tony Richie, a Pentecostal academician, describes the religious interactions in Pentecostalism as taking the form of “self-centered psychosis that alienates itself from any realities of divine presence beyond its own borders.” This has often resulted in the movement “ostracizing itself,” while “demonizing” the other.1 It is a stance that has been unproductive for the calling of being a witness of the Truth in a religiously diverse world. And IFD offers a very appropriate means by which the Church can be present incarnationally with the world in its everyday life. So, as a Pentecostal Christian and a student, and as a person enthused to be a witness for God, I have had a growing desire to transfer an appreciation for IFD to the church and help develop an appropriate methodology for the task.

One of the important lessons I have learned in the task of involving the body of Christ in IFD is the need to discern the role and extent to which the church, especially the laity, should participate in such dialogues. As seen above, verses like 2 John 9-11 have often been used, with good reasons, to discourage dialogue or limit interaction with persons of other faiths. However, the author of 2 John was surely not hoping to create an inhospitable community of believers with his harsh imperatives. Rather, the author most likely was prescribing these cautious measures to ensure that the fledgling church would not be deceived and led astray by false teaching. Consequently, from studying 2 John, it is understood that although ideally IFD could be possible if all believers were rooted and grounded in the Christian faith, it should be left to the more spiritually mature believers, due to the often deficient biblical and theological grounding of Christians. However, this does not excuse the less mature from becoming more theologically informed. In fact, it would greatly profit the church if the less mature were equipped and trained to be effective dialoguers.

A related and necessary step is the need to tease out the reason(s) for the deficiency in theological understanding. For instance, in the Pentecostal tradition, the deficiency often stems from the movement’s tendency to overemphasize the spiritual or emotional aspects of the faith, at the expense of neglecting the intellectual or rational aspects. This deficit has not only affected biblical understanding, but has also influenced many Pentecostals’ implicit theology of religions. As Richie relates, it is a theology that “recognizes that diabolical or demonic forces often deign to use religion—any religion, all religions—for perverse purposes.”2 Pentecostals, and particularly Keralite Pentecostals, often adopt an attitude along the lines of “everything we touch is subject to possible contamination or infection [by the demonic] and therefore is suspect.” Although these are legitimate fears, most often the fear comes from the lack of knowledge about the religious other and an inadequate theology of religions. To correct this, the Christian ought to commit to learning about the religious other, most optimally by dialoguing with them.

Another step toward helping Pentecostals mature with regard to IFD is to cultivate a character of teachability. Amos Yong relates how the Pentecostal identity itself encourages one-way communication. He writes, “As an oral tradition Pentecostals have perennially emphasized the testimony, verbal and prophetic witness, and evangelistic proclamation.”3 Consequently, it is the ingrained default setting of Pentecostals to engage in monologue rather than dialogue. Dayanand Bharati also diagnoses this propensity for one-way communication and attributes it to a “lack of teachability” on the part of the Christian.4 As a corrective, he calls for assuming a “spirit of Apollos,” that is, a willingness to listen and learn when engaging in dialogue as demonstrated in Acts 18.

Lastly, it is important to set the expectations and motives for IFD and clear any misunderstandings about it. For instance, in 1893, the World’s Parliament of Religions held in Chicago, Illinois, initiated dialogue based on “late-nineteenth-century optimism about human progress and confidence in the possibility of universal human “brotherhood.”5 Although held with noble motives, that kind of dialogue can easily devolve into a relativistic pluralism and perpetuate a false sense of unity. Instead, true IFD recognizes that since, as finite and sinful humans, each side knows the Truth only in part, dialogue can refine our understanding of Truth.

Living in false reality and deception is dangerous. This is why the author of 2 John warned the fledgling church against opening themselves up to false teachings. However, if we as a church and particularly the Pentecostal movement fail to pursue a deeper knowledge of our own Christian faith, then we will be greatly susceptible to subscribing to false doctrines that arise in various disguises. Ironically, one way to grow in understanding of the Christian doctrines is by studying what the religious other says. In fact, we see historically that the beliefs of the church were better articulated and understood when the Christian faith came in contact with heresies. This is why I chose to discuss this topic in our church’s Bible study. I encountered minor resistance and ambivalence by some at first—and still others were unsure of whether they could follow along—yet we agreed to proceed with the study, and thus far I have received positive feedback. We hope to continue learning and use this increased understanding to engage in dialogue both formally and informally in our daily interactions with this pluralistic and spiritually diverse world. I pray that both we, and the religious “others” we know, will draw nearer to God by the Spirit through Jesus Christ, the Truth.

1Tony Richie, “Neither Naïve nor Narrow: A Balanced Pentecostal Approach to Christian Theology of Religions,” paper presented at the 2005 Annual Meeting of the American Academy of Religion, 2. 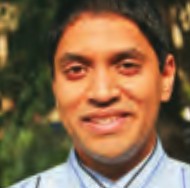 Joshua Muthalali is a first year Master of Divinity student at Fuller Theological Seminary. Joshua grew up in the Indian Pentecostal movement and currently attends an Indian Pentecostal church in Norwalk, California. He serves as a youth pastor intern and is involved in bringing interfaith dialogue to his local church.