The relationship between Latinos and Muslims is over 1200 years old. It is as old as the North African invasions of the Iberian Peninsula in the eighth century and as new as the latest encounter of Latino and Muslim immigrants in urban neighborhoods in the United States. It is reflected in the Arabic influence on the Spanish language, including a theological one, and in efforts to mobilize U.S. Latinos for mission in Muslim majority countries. The links between Islam and Latinos are deeply embedded in the Latino sub-conscious and demonstrated in our way of thinking and speaking. And they are also impacted by the current wave of Islamophobia that is flowing through the United States.

The encounter that began in the eighth century created a complex relationship between Christians and Muslims on the Peninsula. At times there was some level of toleration between Christians, Muslims and Jews. But the Muslims were seen as the invaders and Spanish identity was forged in the struggle to free the Peninsula of these foreigners.

The final battle liberating Spain from the Muslim rulers happened only months before Columbus arrived in the New World. The Spaniards brought with them a sense of destiny, that God had freed them from the Muslims (a last Crusade), but also that God wanted them to conquer the new land. But they also brought a language, a worldview and a religious understanding deeply impacted by seven centuries of interaction with Islam.

The Spanish empire tried to keep Muslims and Jews, or Muslim and Jewish converts to Christianity, from migrating to the new world. But their influence remained in the background. After independence from Spain some Latin American countries allowed migration from the Muslim world. Today there are small, but significant communities of people from various parts of the Middle East in Latin American countries. Many of them come from the minority Christian communities in those regions, but there are also many Muslim immigrants, as well as their descendants. Some of these immigrants have had a very significant impact in their adoptive countries and a few of them have migrated from Latin America to the US.

In the last few years there has also been an “evangelistic” reencounter in both directions. There are now a number of dawah oriented mosques in Latin America and there are growing numbers of Latin American evangélicos who are going into Muslim majority countries as missionaries. In the last few years, some U.S. Latinos/as have also become missionaries in the Muslim world.

Some of the most interesting places of new encounter have been urban areas in the U.S. Immigrants from Muslim countries and Latinos have sometimes found themselves living in the same neighborhoods. For the most part they have not interacted very much. But in both communities there have been leaders who see the other with “evangelistic” eyes. One can find Spanish language literature inviting Latinos to Islam and there are a few Latino churches that have concluded that if they send missionaries abroad, they should also do mission among their Muslim neighbors.

Dawah, the preaching of Islam, takes a slightly different form among Latinos and Latin Americans. Because of the historical links, conversion to Islam by Latinas is often called reversion, a return to what was. Though the numbers are small, it is estimated that up to 6 percent of all U.S. Muslims are from Latin America, though that number includes people of Middle Eastern descent who migrated from Latin America to the U.S. But it also includes Latino converts (the majority of which are women).

It is in this environment that Latino evangélicos deal with Islam and Islamophobia. We inhabit the same environment in which the reality of attacks is translated into the manufacture of fear. So evangélico communities face the same concerns as their non-Latino evangelical neighbors.

But the inter-related history and various encounters provide opportunities for thinking differently about the relationship between Latino evangélicos and Muslims. First of all, some of those Latino/a Muslims may be relatives or at least people with which we have had interaction for an extended period of time. Secondly, if Latino evangélicos are sending people into the Muslim world to build relationships and practice hospitality, then it makes natural sense that we should do that here. Thirdly, if Latino and Muslim immigrants are already interacting in places where neither has power, it creates the space for people to practice a friendship oriented “evangelism” or “dawah.” By recognizing that both are “evangelistically” oriented faiths, and by encountering each other where neither has power, there is a new space, and a potential bridge, where friendship and hospitality might be the guiding principle, instead of fear and suspicion. May it be, by God´s grace. 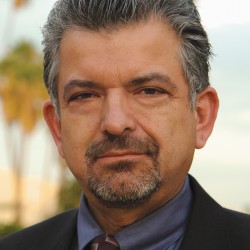 Juan F. Martínez is Professor of Hispanic Studies and Pastoral Leadership and Special Assistant to the Provost, Fuller Theological Seminary.