For all the common—maybe “similar” would be a better word— ground between Christianity and Islam, there remain many differences. In my experience the majority of British Muslims are keen to maintain these differences and, after a brief dalliance with the idea that “we’re all the same”, are quick to point out where we Christians have gone irreconcilably wrong. Yet from that starting point they are happy to converse, as was the Muslim who said to Joseph Cumming, “we want to work with you Evangelicals, because we feel like we have something in common with you…we want to be talking with Christians who take their scriptures seriously.”1

Admitting and focusing on difference is not the beginning of Islamophobia but rather it is part of the solution to it.

The word ‘Islamophobia’ was brought into mainstream usage following a 1997 UK report.2 It highlighted a very real problem of discrimination against Muslims brought about by fear and racism. In the wake of recent terrorist attacks in Europe it remains a problem and hate crimes against Muslims in London rose by a reported 70 percent in 2015.3 However, the term and the concept itself have been extensively criticized by academics, politicians and Christians alike. Bishop Michael Nazir-Ali defines it as “an unreasonable fear of all Muslims, without taking into account their beliefs, their direction in life and what tradition of Islam they come from” but goes on to point out that it has to be distinguished from “a reasonable fear, for example, of people who are committed to terrorism to achieve their aims.”4

Whilst an irrational blanket fear of all Muslims is clearly wrong, this should not blind us to problematic issues that need to be addressed. The concern of some British Christians is that political correctness and fear of being branded Islamophobic can stifle genuine debate about Islam. One British pastor puts it like this: “We totally reject the charge of Islamophobia, which is often just a word used to put off people from being critical of Islam while Muslims remain free to criticise anyone they choose.”5 Clearly this was not what the authors of the original report had in mind as they rightly pointed out that:

“It is not intrinsically phobic or prejudiced to disagree with or to disapprove of Muslim beliefs, laws or practices…In a liberal democracy it is inevitable and healthy that people will criticize and oppose, sometimes robustly, opinions and practices with which they disagree.”6

A further criticism is that the term itself reifies Islam as a single concept.7 Reductionism is always the enemy of progress. Islam and Muslims are hugely diverse and complex. Only a nuanced approach to this complexity can hope to bear fruit. The common reductions heard in the UK today from politicians as well as Christians and Muslims are arguments such as:

Each has an element of truth. No one equation provides a sufficient explanation or solution to the presenting complexity of Islam and its relations with the West.

On the other hand, Douglas Johnston, drawing on Thomas Kidd’s excellent work (as printed in this issue of the journal), depicts something of the complexity on the Christian side.8 The historical background is, if anything, even more intense in Europe than in the United States. Comments by the reformers picturing Muhammad as an antichrist second only to the pope were made against the backdrop of the Ottoman Empire hammering at the gates of Vienna.9 The missional aspect is also foremost in the minds of many British evangelicals which leads them to be cautious of inter-faith dialogue which they fear could dilute their passion to share the Good News. However, whilst theological disputes over the nature of Islam and whether Allah is the God of the Bible are as sharp as ever, British evangelicals are not nearly so enamored with doomsday scenarios and Zionism as their American counterparts seem to be. Whilst some do embrace these interests, the majority seemed to have been tempered by the work of Stephen Sizer and Colin Chapman who share a concern for justice and freedom for the Palestinians.10

However, that same concern for justice and freedom also drives probably the greatest concern and complaint that British Christians have: the persecution of their brothers and sisters in Muslimmajority contexts. Even apart from the horrors inflicted on Christian minorities by ISIS, Open Doors reports that 8 of the top 10 countries on their 2016 watch list of places it is difficult to live as a Christian are Muslim-majority nations. Also, many British evangelical churches subscribe to the Barnabas Fund magazine which each month details a sad litany of violence against Christians.11 Such treatment has been dubbed “Christianophobia” emphasising the fact that religious phobia is not the preserve of the West.12 Muslims too have issues to address.

These issues doubtlessly could be divided into a threefold matrix to mirror that which Johnston constructs. Politically, Muslims regardless of their own history in this respect, would point to two centuries of Western imperialism that they feel has still not ended. Christian minorities are often seen as a fifth column and pay a high price for Western actions. Anti-Zionism too plays its part and many within ISIS are eschatologically driven, quite apart from traditional theological interpretations that problematize dhimmi communities and apostasy. Finally, a supercessionist worldview in many cases drives expansionism and da‘wa at both the state and civil society levels.

The key question is then: how can Christians love Muslims when there are such difficult issues to address and when they hear so much about Muslims persecuting Christians?

Certainly there needs to be an evolution in the way that Christians relate to Muslims. Playground taunts about religious “cooties” (whatever they are!) are not good enough. Neither do we want to be naïve victims of a rose-tinted crush, which patronisingly ignores difference. But what does a “third level” relationship look like? Reconciliation between religions? Marriage? Syncretism? Surely not. Rather mature relationships between individuals and communities must be mutually critical and able to withstand the difficult questions and issues that need to be processed, whilst maintaining the boundaries that clearly demarcate the faiths.

I recently wrote (I hope) a positive yet critical piece in the CMCS Research Briefing looking at the horrendous Dabiq propaganda produced by ISIS and comparing it to a magazine called Haqiqah produced by British imams to counteract it.13 Whilst Dabiq presents a compelling call to adventure and sacrifice on behalf of their self-proclaimed Caliphate, the Haqiqah magazine has no such appeal. Muslims are to be nice and to behave themselves. No extremism allowed.

Yet extremism is a natural part of the human psyche. Channelled rightly we applaud it.14 When it goes awry it is a terrible thing.

Evangelicals are indeed zealous people. The challenge is to see that zeal channelled into loving and calling others. Brother Andrew, in his book Secret Believers, recounts the story of converts to Christianity in a Muslim country. Although fictional, the story is based on real-life situations known to the author and makes sobering reading as it tells of the challenges, persecution and eventual martyrdom faced by these faithful believers. Remarkably, after such an account the message of the remainder of the book is not that Christians should fear Muslims or be resentful, but rather it is a challenge to a “good jihad” that would bring hope to the Muslim world. Andrew presents four challenges to the church today: “to love all Muslims by giving them the Good News, to forgive when we are attacked, to live lives totally committed to Jesus Christ, and to engage in the real war—the spiritual war.” He suggests that the only hope for the world is if millions of Christians learn to love Muslims with Christ’s love. Now that is an extreme way to overcome a phobia! 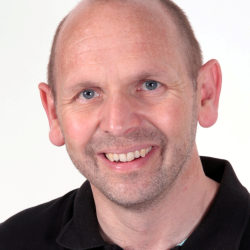 Richard McCallum is a fellow at the Centre for Muslim-Christian Studies, Oxford. His research interests include the sociology of religion, the contemporary encounter of faith groups and Christian-Muslim relations. He teaches Contemporary Islam, Christian-Muslim Relations and Christian Responses to Islam at various colleges in addition to providing inter-cultural training to industry, faith groups and the public sector. Kathryn Kraft is Lecturer in International Development at the University of East London and Head of Research for Served. With a PhD from the University of Bristol and an MA from the American University of Beirut, she has nearly 15 years of experience in research and humanitarian aid in the Middle East. She teaches and researches on faith and humanitarianism, storytelling in conflict transformation, NGO management, and inter-communal dynamics of the Arab Middle East.