Muslims and Christians Fighting Ebola Together in Sierra Leone

The unprecedented 20-month-long Ebola epidemic that has devastated Guinea, Liberia, and Sierra Leone overwhelmed international emergency health systems and tested the faith of believers, both Christian and Muslim. Yet as the crisis ends, it is clear that this enormous suffering provided the impetus for Muslim and Christian leaders to work together to change behaviors, save lives, reduce fear and stigma, and restore hope.

I was in Sierra Leone in May 2014 when reports of the first cases emerged. Initially, it was hard to convince people that Ebola was real. Rumors were rampant. Some suspected that news of an invisible killer virus might be a political ploy of the central government in Freetown jockeying for advantage in upcoming elections. People did not trust or believe the public health warnings broadcast from the capital. Desperation and resistance grew. As the virus spread, people hid sick family members and deceased loved ones, exacerbating the outbreak. Traditional burial practices, with last rites of washing the dead and kissing them farewell, became secret, rapidly multiplying chains of virus transmission. Few knew that the corpse of an Ebola victim is at the most infectious stage.

The weak national healthcare system was immediately overwhelmed. Healthcare workers with limited protective equipment valiantly tried to cope, even when their low pay was delayed by challenges in the payroll system. Delayed international assistance and media hysteria further aggravated the crisis. National ministries of health, the World Health Organization (WHO), and other UN and international agencies were initially slow to react to and contain rapid cross-border chains of transmission of the virus. Fear, skepticism, and resistance prevailed as weekly death counts soared.

“It was very hard to grasp what Ebola was and how to respond to the threat,” said Ayeshata Turay, chair of a Muslim women’s association and vice principal of a secondary school in Bo, Sierra Leone. “Early radio alerts announced that Ebola kills and had no cure. Fear gripped everyone. However, when our faith leaders began to teach us about Ebola they helped us take it seriously.”1

Sierra Leone is a fragile state, among the poorest in the world, still recovering from a devastating ten-year civil war that ended in 2002. The population of 6 million is about 70–80 percent Muslim, with a history of harmonious interreligious respect, mutual acceptance, and solidarity. Most people trust their imams, priests, or pastors to interpret the world around them. As one imam observed, over 75 percent of all Sierra Leoneans hear from their faith leaders at least once a week during worship and prayer services.

From 1997 to 2002, faith leaders played a critical role in ending the civil war, working through the Inter-Religious Council of Sierra Leone (IRCSL).

Although uneven in its influence, the IRCSL played a significant role in facilitating an end to the war. Not only did IRCSL leaders capitalize on their longstanding reputations as respected leaders, but they used a unique set of tools unavailable to other groups to achieve their goals. From initiating public ceremonies with prayers to referencing the Bible and Koran in their individual negotiations, “religion” was instrumental—not incidental—in the IRCSL’s success as a “neutral” peacebroker, at the end of the civil war.2

In June 2014, some leaders of the IRCSL reorganized to fight Ebola, leveraging the people’s trust to lobby the government to act. Ebola was still considered a remote problem under control in isolated corners of Sierra Leone, Guinea, and Liberia. The Rev. John K. Yambasu, the United Methodist bishop for Sierra Leone, foresaw the far-reaching repercussions of the epidemic and convened a more inclusive National Religious Leaders Task Force on Ebola, with some members of the IRCSL and nonmembers as well. “We all came together, imams and pastors, and trained in the area of basic Ebola prevention,” Yambasu said. This task force encouraged the president to declare a national public health emergency on July 31, 2014, putting in place stringent measures to curb the Ebola outbreak.3

I was in Bo, Sierra Leone, in May 2014 to lead a World Vision workshop entitled “Christian and Muslim Cooperation for Child Health and Protection.” World Vision trained and mobilized 50 imams and pastors from its 25 area development programs across the country to promote the well-being and protection of children, recognizing that the good will and cooperation of Muslim and Christian faith leaders was essential to bring about needed change. These faith leaders would later swing into action against Ebola, reaching out to their paramount chiefs, the traditional leaders of clusters of small communities. Rapid community engagement by paramount chiefs with their chief imams and chief pastors/priests began to implement bylaws, codes of conduct, for behavior change to protect their communities from Ebola.

Meanwhile, infection rates skyrocketed across all three affected countries as WHO, Médecins Sans Frontières (MSF [Doctors Without Borders]), Centers for Disease Control (CDC), and numerous emergency medical agencies implemented a range of standard outbreak control measures to stop the epidemic.4 By late summer 2014 it had become clear that traditional burial practices with unprotected touching of corpses of Ebola victims, compounded by stiff resistance to clinical approaches to dead body disposal were spreading the virus. The religious convictions and cultural practices of families were being violated. “Paying last respects by praying as a family at the burial of a loved one is essential. Celebrating death by washing the body of the dead is a vital part of life. Our people believe there will be no rest for the soul without a proper burial. The spirit of the deceased hovers, provoking bad dreams, haunting the living.” Bio-medical solutions promoted by international health organizations were not addressing the cultural, traditional, and religious aspects of the transmission and so not making the impact expected on the epidemic. “There was over-emphasis on establishing clinical ETUs [Ebola Treatment Units] for treatment. The people felt forgotten and de-humanized.”5

Recognizing the need to change tactics, WHO asked the World Council of Churches (WCC) and UNAIDS to apply lessons from the HIV-AIDS crisis by mobilizing faith leaders to help create a new safe and dignified burial protocol for Ebola.6 Public health experts in WHO partnered with the International Federation of Red Cross & Red Crescent Societies (IFRC) to form an interdisciplinary working group with the WCC, Caritas, World Vision, and Islamic Relief to develop a new Safe and Dignified Burial standard operating procedure for Ebola.7 This was rapidly rolled out in October. World Vision, Catholic Relief Services (CRS), and other faith-based organizations partnered with the Red Cross to manage these more religiously and culturally sensitive burials. This approach was important as part of the suite of measures that dramatically reduced infections and helped to put the epidemic in decline.

For almost 20 years, World Vision Sierra Leone has partnered with faith leaders and their communities—both Christian and Muslim—as well as government ministries and fellow development organizations to improve health, education, food security, and protection for children.

Prior to Ebola, to support and enhance pioneering work of faith leaders in Sierra Leone, World Vision introduced Channels of Hope (CoH) to combat HIV-AIDS. CoH aims to transform and motivate faith leaders and their congregations to respond to tough issues that affect their communities. The CoH process addresses faith leaders’ perceptions about especially volatile or taboo community issues; it equips them to break down walls of stigma and discrimination and respond with compassion, particularly to issues relating to children’s well-being. Since the start of CoH for HIV in 2005, some 400,000 faith leaders and their community members have participated in more than 17,700 workshops, reaching every global region where World Vision operates.8

“We convinced people that, according to our respective faiths, it was theologically acceptable to lay aside certain traditions, such as washing the deceased, during this national emergency,” explained Imam Alhaji Mustapha Alpha Koker, chair of the Muslim Council of Bo, an accredited Channels of Hope for Ebola trainer. “In the CoH workshops, we pointed out that the Qur’an tells us that warriors who died in battle were not washed before being buried. It helped people to know that they were abiding by their beliefs in not preparing their loved ones for burial as they would normally do.”10 The Reverend Peter Kainwo, Pastor of the United Brethren in Christ, Bo, found the biblical basis for Channels of Hope guiding principles very powerful motivators for all the Christian leaders he trained in CoH Ebola. “The love of Christ compels us to care for all our neighbors.”11 Dr. Alhaji Sanyi Turay, the Bo District medical officer, described the impact of the faith leaders’ work: “When faith leaders got involved in the fight against Ebola, it was a turning point. They convinced people in churches and mosques to stop touching and burying Ebola victims, who remain highly infectious.”12 Families of ill patients and the deceased were instructed to call the national 117 Ebola hotline, which would dispatch an ambulance or an official burial team.

“Channels of Hope gave us the opportunity to prove what we could do as religious leaders for this country,” says Imam Koker. “The program is unique because it is based on the divine scriptures of the Qur’an and the Bible.”

Sierra Leonean faith leaders who attended World Vision CoH workshops reached more than 379,000 people over an eight-month period from November 2014 to July 2015, in partnership with Catholic Relief Services, the Catholic Agency for Overseas Development, and local interreligious councils. A reported 18,840 focus groups on Ebola prevention and treatment were conducted by interreligious teams. Countless sermons were preached in churches and mosques. One measure of impact, in part, of this community engagement13 is that not one of over 58,000 sponsored children in World Vision programs, nor their families, were infected with Ebola.

The Ebola crisis in Sierra Leone is slowly ending, although the virus will remain. Continued vigilance will be vital once the country is declared Ebola-free. Recently, on my third trip to Sierra Leone, I met with several Christian and Muslim leaders trained in CoH Ebola, who had worked so diligently to protect their country. They are now planning to cooperate to reduce the incidence of early marriage, a major obstacle to girls’ health and education in Sierra Leone. Working together on Ebola was so satisfying that they want to continue to build a better future for their children. Their enthusiasm and energy about the work remaining was impressive.

Sierra Leone is an important example of solidarity and social cohesion between Muslims and Christians in contrast to other nations in West Africa and globally.14 Over the last 20 years, when under existential threat, Muslim and Christian leaders have taken the initiative to unite and work together to save and rebuild Sierra Leone. In the late 1990s they led efforts to bring a decade-long civil war to an end in 2002. They battled together against malaria and cholera between 2008 and 2012. Over the last year they restored dignity to the dead and grieving, building trust in holistic bio-medical solutions to stop the Ebola epidemic. A challenge in the post-Ebola recovery will be not to take for granted mutual respect and tolerance, but to deepen and strengthen a more effective and inclusive interreligious platform while passing the torch to the next generation of Muslim and Christian leaders.

[2]Hilary A. Hurd, “The International Council of Sierra Leone as Peace-Facilitator in Sierra Leone (1991–present),” PhD diss., University of Cambridge, 2014.

[8]“What is Channels of Hope [CoH],” Church and Interfaith Engagement, on the World Vision International website: http://www.wvi.org/church-and-interfaith-engagement/what-channels-hope. 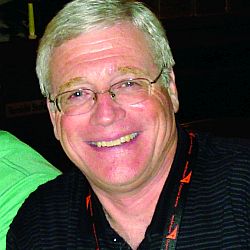 Dave Robinson is senior advisor for Christian-Muslim relations in World Vision’s global operations. From October 2014 until March 2015, he served in leadership roles on World Vision International’s Ebola Response Team in West Africa. He helped adapt WVI’s Channels of Hope to mobilize and educate community faith leaders to address Ebola. Over the past 30 years he has led WV relief and development programs in Mauritania, the Middle East, Central Asia, and Indonesia.