One of the many things I appreciate about Dr. Gupta’s article was his emphasis on place. In his analysis of interreligious encounters in the New Testament, he examines Jesus’ interaction with the Samaritan woman at the well as a model for dialogue (John 4). In my years of participating in dialogue events, I have heard many people draw insights from Jesus’ encounter with Samaritans, but Dr. Gupta is the first to draw our attention to the importance of the well, the actual place of the encounter. He describes the well as “a warm and gracious” environment. It is a place of common humanity, where both Jesus and the woman come as thirsty people who need a drink.

Over the years, we have learned that the physical place of dialogue is not just functional, but formational, and thus should be a vital consideration as we seek to make disciples who are both peacemakers and gospel proclaimers. Places communicate; they teach. They silently shape the culture and conduct of the people within the place. For example, when a person enters a library, they are compelled to speak in whispers, while a football stadium invites us to make noise. Therefore, when organizing dialogue, it is important to consider the place of meeting and what that place communicates about our intentions and expectations.

The “Wells” of the 21st Century

Places of worship, such as churches, mosques, synagogues, and so on, can often provide a good context for dialogue, especially if the gathering is focused on learning about the particular religion that worships in that building. However, many people are intimidated by entering places that are unfamiliar and devoted to the worship of something they do not believe in. They find themselves walking on eggshells so as to not inadvertently offend either their neighbor or their God.

We at Redemption Church continue to accept invitations to houses of worship and to welcome people into our churches, but we are always searching for better places. We are looking for modern-day “wells” in which we can share a common cup of water and discuss crucial questions of life.

What do these places look like? These are places that affirm the common humanity of all parties involved without having to share a common theology. These are places centered on the common good or a common meal, places where both kindness and boldness can flourish. We have found many such “wells” scattered throughout our city. Some of the best include service projects, gardens, and playgrounds.

Sometimes people need to work shoulder-to-shoulder before they can talk face-to-face. Therefore, walls with graffiti, homeless shelters, and litter-filled highways can often be better contexts than a lecture hall or place of worship. In these settings, people do not have to build on a common theology, but come together out of a common commitment to the flourishing of the city. This has been a good thing for conservative Christians and Muslims, who have often felt excluded from dialogue because of their belief in exclusive truth. They are hesitant to attend gatherings that start with common theological convictions, because they believe the differences are vitally important, and do not want to leave the impression that “we all believe the same thing.” I am sympathetic to this, and have often felt uncomfortable in interfaith settings that diminish the differences between faiths. My imam friends have expressed similar concerns. However, working together on a service project that pursues the common good frames the gathering around our identity as neighbors and a common commitment to the flourishing of our city.

Phoenix has a sizeable Uzbek community that consists of many devout Muslims. My church built a strong relationship with them through a city beautification project focused on repainting walls that were covered with graffiti. After several hours of working shoulder-to-shoulder, we sat along the side of a road for a picnic. Having had an opportunity to get to know each other, and having a shared sense of accomplishment as we looked back at our work, we were ready to ask the deeper questions about our beliefs, backgrounds, and convictions. If you had listened in to those conversations, you would have heard sincere questions, respectful disagreements, heartfelt stories, and even belly laughs from newly developed inside jokes. Organic friendships grew out of a common commitment to common good, not common beliefs.

2. Dialogue in the Dirt

Perhaps the best place to find common ground is the literal soil of a garden. Few things hinder fruitful dialogue like pride and arrogance, but the garden has a unique ability to humble us. It brings us close to the ground, with our knees on the earth and our hands covered in compost. Pretensions that easily bind themselves to lecterns and designer suits seem to be washed away when watering plants. In the garden, we become reacquainted with our frailty, knowing that we are dependent on God and connected to our neighbors through the food that sustains our life. The humanity of the Samaritan woman and Jesus were both demonstrated through their need for water. The garden, like the well, is a place where we are humbled by the acknowledgment of our need. Before our mouths are engaged in dialogue, it is often good for them to be filled with heirloom tomatoes.

For the past year, I have shared a garden with my friend Ali, who is from Afghanistan. I have known him for years, but there is a depth to our friendship that has grown over the past year. We have shared unbearably hot peppers, debated our strategy to deter pests, and had the opportunity to extend generosity to others by giving away our harvest. During our times in the garden, we have had deep conversations about our individual stories and the Story that we believe defines the world. They are different stories, but we understand each other better, and appreciate each other more. Rather than a cold exchange of propositions, we have discussed the deepest concerns of our hearts, from his fears of the Taliban and my fears about my daughter’s autism. The zucchinis, eggplants, worms, and watermelons have witnessed the deepening of a friendship and commitment to each other’s good.

3. Dialogue at the Playground

The meeting at the well was not a planned event, but was an organic conversation that happened in a common area, in the natural flow of life. A comparable place is a playground at a local park, which is one of the best places for spontaneous multifaith engagement and for organized multifaith playgroups. I have heard countless stories of people who have met their Muslim, Jewish, or Hindu neighbors as they have watched their children play. Depending on the city and on the intentionality of people, this can be a very common occurrence. I have even heard of a group in our city that formally organized a multifaith group that had deep discussions while their children played on the swings.

The presence of children provides a visual reminder of the importance of peacemaking. With the Phoenix area being one of the most religiously diverse places in the country, but also one of the most divided, we know we are sowing peace for future generations.

Furthermore, Dr. Goldingay’s article shows us the tension that emerges from the First Testament’s affirmation of people from other religions as image-bearers of God and the exclusive nature of the biblical story that calls people to repent and believe in Christ. The presence of children can help us live within that tension without compromising friendship or the gospel. Because we want to model respectful discourse to our children, we are less likely to be combative and rude. We are also less likely to water down our deep convictions about the gospel story because we do not want to confuse our children. The presence of children keeps us accountable to being both gentle and bold at the same time, filled with grace and truth, because we know that our kids are watching.

Those of us who organize and participate in multifaith events often find our minds occupied with complex things like theology, politics, cross-cultural dynamics, media narratives, addressing misunderstandings, and the many delicate relationships that are integral to this work. With all of these complex issues on our mind, it is easy to overlook something as seemingly simple as the issue of place. However, our God is a placemaker who carefully crafted a hospitable world. As his image-bearers, it is our privilege to do the same. As we pursue peace and promote dialogue, let us consider the importance of place and meet Jesus and our Samaritan neighbors at the wells of the 21st century. 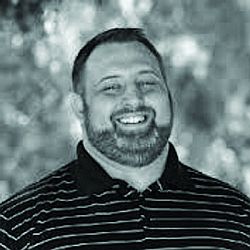 Jim Mullins is pastor of teaching, communities, and cultural engagement at Redemption Church in Tempe, Arizona. He is also the cofounder of Peace Catalyst International and International Guild of Visual Peacemakers. He and his wife, Jenny, live with their daughter, Elliana, in Tempe.