It seems an unfavorable time to be discussing interfaith dialogue and mission. Throughout the world we encounter unrest about the situation in the Middle East, where the announcement of a caliphate has captured the hearts and imaginations of many of the younger generation in the region. The prospects for the Christian community in the Middle East are dim, due to the fact that militant forms of Islam have enlarged their basis of power. The overthrow of old dictatorial regimes did not pave the way for modern forms of democracy, but rather created a power vacuum within which radical Islamic groups have multiplied. The modern call to jihad even attracts youngsters from different western countries.

What is it that attracts and fascinates them? One of the major draws is a compelling “grand narrative.” This is an attractive vision of a caliphate, and it centers on devotion to Allah and a pure life according to the sharia. Such a vision gives form and meaning to life. This narrative offered by the caliphate awakens memories of a powerful Islamic empire that dominated much of the world. For Christians in the Middle East, this all has devastating consequences as many of the Christian communities that have existed for centuries in the region are facing near extinction.

The Middle East is not the only place where the prospects for interfaith dialogue between Muslims and Christians seem poor. Stories of Boko Haram in Nigeria and reports from Pakistan, Malaysia, and Indonesia also point to the endangered situation of many Christians. What does this all mean for Christian mission and interfaith dialogue? In order to explore this question I would like to focus on the grand narrative that we live from and from which we draw our hope. Taking this narrative approach affords a way into the larger religious imaginations that differentiate Muslims, Liberals, and Christians.

The Context of the Netherlands

The reports of a growing militant Islam have ripple effects on numerous social and political contexts. In my country, the Netherlands, official institutions try to keep a sharp eye on the young men who have served as soldiers and warriors in the jihad. Due to these war experiences, their training, and the possibility of being traumatized, these men are regarded as a risk factor to society. Their existence fueled the anxiety, unrest and turmoil that found its fevered pitch in the public debate over the murder of Theo van Gogh by a Muslim extremist in 2004. In the days following the murder, my country found itself wrestling with serious questions: How should society react to this religious radicalism? What can a modern secularist society offer those who belong to such groups?

The Islamisation of a growing number of youth in the Netherlands comes as a shock to the liberal majority and runs against the grain of the values and norms of the dominant forces in Dutch society. The grand narrative advocated by the caliphate challenges the (largely assumed) grand narrative of secular liberalism. What is this liberal narrative? The liberal narrative is one of self-determination and offers a vision of a free individual who is able to manage his or her own life like a modern-day Robinson Crusoe in the midst of challenges. It tells the story of equality in which all members of society have the rights and access to education, medical care, economic opportunities, political freedoms, and a network of social care. The integrity of the human person and equality of gender and sex are among the achievements of this modern liberal society, which regards itself as the apex of human development. But what does an individual do when society leaves them jobless and does not seem to need them? The dark side of the liberal narrative is that it requires you to be successful, for in the end it is only the winners who count in this evolutionary view of society. It turns out that for all its claims of equality and advancement, this narrative is cold, empty, and often cruel.

The Christian Narrative and Interfaith Engagement

But does the Christian faith offer a different narrative that draws from different values? Or has the church succumbed to the values and norms of their cultural habitat, and allowed the Christian story to become hidden and veiled? The grand narrative of the gospel, and more generally, the drama of the covenant, is the source of the life for the church. It is this narrative after all that is the source of the values and norms to guide our way of life as followers of Jesus in society. And it is exactly this narrative that we bring with us in our encounter and dialogue with other faith communities.

It is important to first examine what we mean when we speak of interfaith dialogue. Does this refer to official dialogues about theology between religious leaders? Granted, such things are important and indispensable. In the aftermath of his Regensburger Address in 2006, Pope Benedict XVI launched an important high-level dialogue on the commonalities and differences between the Christian faith and Islam. Additionally, this inspired Miroslav Volf to write his book Allah: A Christian Response. As important as such advanced discussions may be, they nevertheless have their limitations when viewed from the perspective of Christian mission. In light of a broader view of mission, the effects of such dialogues are mostly restricted to a group of elite scholars. The highly appraised book of Volf is itself an example of the fact that mission is not the aim of such projects. Volf’s concern was the earthly coexistence of Christians and Muslims.1 Of course, official dialogues and critical assessment do have a role to play in mission as they can create a framework and legitimation for political pluralism and peaceful coexistence between religious groups. But as helpful as such official dialogues may be, there is a level that is more decisive for mission: the level of communal life and shared societal practices. Interfaith engagement occurs where people share their lives, neighborhoods, and office spaces. The lived life of every day is at the forefront of mission. Dialogue and theological reflection play a role, but they are on a limited register, and often remain at a purely academic level.

This is why we must also be attentive to the contextual location in which dialogue and encounter take place. Circumstances differ among continents, countries, cities, neighborhoods, and families. For many people the existence of Jews, Muslims, Hindus, and Buddhists is not part and parcel of their daily life. They rarely meet adherents of other religions and so this issue of interfaith engagement remains at a distance. Interfaith engagement often comes as a challenge to people when in the routines of their everyday lives they become inescapably intertwined with people of other faiths within the realms of the work environment, shared public spaces, or even the family, as when a daughter marries a Muslim, or a brother converts to Buddhism. On such occasions the question of mission and the communication of the gospel take on new urgency and relevance, as it becomes an everyday life question.

Furthermore, interfaith dialogue is also bound up with intercultural dialogue. For example, someone born in the Middle East will, when living in the Netherlands, likely find the Dutch celebration of Sinterklaas peculiar and foreign. At the same time, this person might find that they miss the communality of Ramadan and the celebration of the Sugar Feast. We all are profoundly shaped by the upbringing of our native culture, although we are hardly aware of how deep we are formed and determined by it. However, these important cultural and religious differences notwithstanding, there are certain shared situations—especially those related to the lifecycle, life and death, sorrow and joy, and celebrations of marriage and the birth of children—that present opportunities for sharing life and faith across these divides. This type of interreligious and intercultural engagement is powerfully captured in an experience that my wife, Margriet, had as hospital chaplain with an Iraqi woman named Farasha. It is a story that points to the ways in which an interfaith encounter involves helping a person to cope with grief. And it points to the power of the Christian narrative to offer tangible ways to bridge these divides and help a fellow human in need. Farasha had recently given birth to a son with severe disabilities. Tragically, he had no chance of survival. Margriet relayed the following conversation with Farasha.

“Farasha sat with her very sick little boy on her lap. We both knew that he had a short time to live. She said, ‘My mother pressed me to the heart that I must be a good Muslim and not cry.’ She told me that ‘I must bow and be silent’ for ‘everything comes from Allah, and therefore everything is done correctly.’ But Farasha questioned her mother, ‘Did not the prophet weep over his dead baby son? Why would she not be allowed to cry?’ I felt very connected to this mother. As a Christian I know of a similar story about the Son of God who wept at the grave of his friend. Reading in John 11 that Jesus wept and groaned over his friend’s death, I strongly believe that the death of a child—or bombed cities, tortured people, drowned people off the coast of Lampedusa, or the story of an abused woman—are never to be ‘accepted.’ When the Church proclaims that its chief witness, Jesus, has conquered the enemy of death, you cannot at the same time say that you have to accept death as a friend. That should be called, ‘collaborating with the enemy.’”

In this interfaith and intercultural encounter, mission takes the form of sharing in the grief of the mother and at the same time being mindful of the hope offered by the gospel. God is faithful to humanity in its lost and fallen condition. This faithfulness became concrete in the love of Jesus, in all its vulnerability. It is by the work of the Holy Spirit that the reality of this love imbues our lives and cultures. The Book of Acts shows what happens when the gospel crosses the borders of language, race, culture, class, and gender. The grand narrative of the Christian gospel has a trickle-down effect that transforms life in unexpected ways. When people have the courage to share their lives, their anxieties, hopes, and doubts, space will open up by the power of the Spirit for the communication of the gospel. Interfaith engagement therefore should not be viewed as the suppression of the gospel but as an expression of its power in our lives with others. Let us be reminded of Jesus, his love and life—how he was confirmed by God the Father as a servant (ebed), and his exaltation is “a sure pledge that he, as the Head, will take us, his members, up to himself” (Heidelberger Catechism Q/A 49). That narrative is the treasure that was passed on to us as followers of Jesus. And through the empowering of the Holy Spirit it has the power to transform our discipleship in our contemporary religiously pluralistic society. 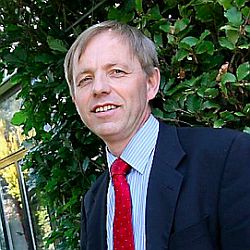