Is it appropriate for Christians to assert that Christianity advocates love and forgiveness, whereas Islam promotes violent jihad and terrorism? How should Christians respond to those who make such comparisons between Christianity and Islam? I think it is important for those of us who are Christians not to compare the best parts of the Christian tradition with the worst parts of Islam.

We live in a world in which people commonly compare themselves favorably to others by selective and unfair means. For example, politicians often focus on the weaknesses of their opponents while highlighting their own strengths. Such comparisons frequently involve distortions on both sides: twisting their opponents’ views and hiding flaws in their own positions. We also see such behavior in families and among friends. We tend to focus on the bothersome flaws in someone else while ignoring problems in our own behavior. Yet, as we know, a family or group of friends in which people dwell on the flaws rather than the strengths of others can quickly degenerate into accusations and unhappiness.

Jesus has a word for such situations. He criticizes offering to take the speck of sawdust out of our neighbor’s eye when we have a plank in our own (Matt. 7:3-5; Lk. 6:41-42). We so readily see a small blemish in someone else while ignoring major flaws in ourselves. Jesus identifies this behavior as hypocrisy and encourages us to remove the flaws in ourselves before working to remove the blemish we see in someone else.

In the context of Christian engagement with Islam, we should not compare our best with their worst. Both Christianity and Islam have elements that depart from the best ideals of their religion. But if one side compares its best to the worst in the other, that is not a fair comparison. Instead, we should compare their best with our best, or their worst with our worst.

Christians are often inclined to see Islam as more violent than Christianity. But a fair comparison would need to recognize the many instances, even within the past century, when Christianity has been used to support violence. In the United States, Christianity has been used to justify lynching, intimidation, and oppression of African Americans. In Northern Ireland, Christians were on both sides of a conflict that took many lives and terrorized a country. In South Africa, Christianity was used to justify the ideology and violence that buttressed the apartheid regime.

So I would argue that any discussion of concerns about instances of violence in Islam should also recognize the violence that has been all-too present in Christianity. And any discussion of Christianity’s emphasis on love and justice should look for similar emphases in Islam. Otherwise, we will be unfair and hypocritical in our engagement with our Muslim neighbors. 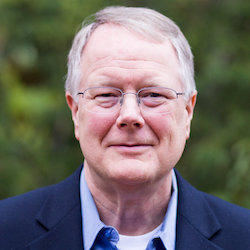 Ronald J. Feenstra is Academic Dean and Professor of Systematic and Philosophical Theology at Calvin Theological Seminary. He has participated in Reformed-Roman Catholic dialogue since the late 1990s.