Sola scriptura, sola fide, sola gratia, sola Christus, and sola Deo gloria. Of the five solas from the Reformation, sola scriptura resonates heavily with the evangelical tradition. When we are presented with new ideas we often respond, “where is that in Scripture?” John Goldingay and Nijay Gupta have provided thoughtful meditations on how Scripture can inform our understanding and approach to other religions. Goldingay weaves exegetical fidelity with historical insight to suggest how the “First” Testament recognized reflections of God’s truth in other religions and yet called them to the fuller narrative of God’s particular relation with Israel. Gupta draws on his personal experience interacting with other religions, particularly Hinduism, to argue that the New Testament moves us past absolute questions and towards mutual investigations of how God interacts with humanity. Although Goldingay and Gupta examine two separate Testaments, they come to a number of similar conclusions. There are two in particular I find encouraging for interfaith relations.

The first, and perhaps most controversial conclusion, is that salvation is a non-question when engaging in interfaith relations. Goldingay separates “religion” from the human relationship with God where he states, “There is salvation in no religion because religions do not save.” Religion cannot save for Goldingay because it is simply a reaction to God. Salvation only comes from God. Thus, the question “which religion saves?” is not an appropriate question. Rather one should ask, which religion most reflects God’s revelation and restorative relationship with creation? Gupta emphasizes the same conclusion with his use of Lesslie Newbigin’s critique of Christians whose only goal in interfaith relations is to find the truth to save souls. Inquiries into soteriology are futile as certainty lies only with God. Rather, we should shift our attention to understanding how different cultures and religions can contribute towards embracing the gospel narrative. Goldingay and Gupta are not saying that salvation is not important. What they are saying—and this is an important nuance—is that we cannot know another’s salvific status with absolute certainty. Therefore, evangelical interfaith dialogue should shelve such discussions and engage in a more fruitful investigation.

Goldingay and Gupta suggest the more fruitful path is through open engagement with non-Christian religions. The foundation of their approach is the belief that non-Christian religions have some level of interaction with God. This is not pluralism. Goldingay filters the contributive potency of other religions in accordance with their moral, social, and cultural effects. Gupta is clear that Jesus Christ is the fullness of truth. The goal is to shift evangelical perspectives from at best ignoring other religions or at worst attacking them towards a witness to other religions of Christ as the fullness of all religious desires. As Gupta suggests, evangelical interfaith dialogue does not seek to problematize other religions but to bestow a blessings on the other.

I applaud this shift from antagonism to hospitality. Yet evangelical interfaith relations need to take a further step from viewing the religious other as guest to the religious other as legitimate. Christians should absolutely seek to bless the religious other through all manner of witnessing. Yet Christians should also be open to receiving blessing from the religious other. As long as we are the ones inviting and we are the ones blessing, we neglect the veracity of the other religion to speak into our own understanding. If other religions truly do have some relation with God, then we must be open to receiving what God might have wrought among them. Just as Israel was awaiting the coming of the Messiah, so too are we now awaiting Christ’s return. As we live in this penultimate time we must be humble in our claims to certainty. The postponement of certainty, our humility before the work of God in other religions, elevates the legitimacy of the religious other so that we might also be their guests and receive their blessings. 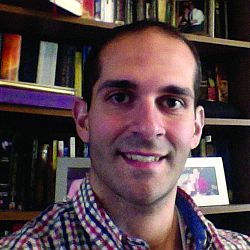 Alexander Massad is a PhD Student at Georgetown University working on comparative theology and focusing on Islam and Reformed theology. His current research examines how conceptions of religious identity and apostasy are formed in religiously pluralistic polities.