Sarah sat hidden under her office desk. This was the third night in a month she’d had to sleep at work to meet a project deadline. Her job as an architect was not unfolding as she had imagined. Fresh out of school, she wanted to design spaces and make cities beautiful. Instead, she found herself working insane hours on projects that did little to satisfy her. As she sat curled up that night, she realized she was suffocating and wanted out—so she crawled out from under her desk and ran into her boss’s office. Speaking through tears, Sarah sensed that she was leaving not only her job at that firm but her career as an architect. Yet she had been so sure that God had called her to this vocation. When Sarah left that job, she realized that if she wanted reasonable hours and satisfying projects, she would have to chart her own way forward.

WORK IS CHANGING
Christians have callings. For many of us, our callings include working. However, it is no secret that the world—including the workplace—is changing at a rapid and disruptive pace. As Thomas Freidman puts it, “the three largest forces on the planet—technology, globalization, and climate change—are all accelerating at once. As a result, so many aspects of our societies, workplaces, and geopolitics are being reshaped and need to be reimagined.”1 This reality has enormous implications on our systems of work and thus how we understand vocation.

Today’s Protestant theology of vocation is rooted in the work of the Reformers. Generally speaking, we understand calling to consist of both central and particular calls.2 First, our central call—and our shared vocation—is Jesus’ invitation to “follow me” into the kingdom of God.3 Second, Christians have particular calls: specific places to participate in the kingdom through our work. In Scripture, we see examples of God’s particular calls. God calls Moses and Aaron to work that helps usher in liberation for God’s people (Exod 3:4, 28:1). God calls the prophets Samuel (1 Sam 3:10), Jeremiah (Jer 1:4-5), and Amos (Amos 7:15). In Matthew 4, Jesus calls his disciples with the invitation, “Follow me, and I will make you fish for people.” In this, “Follow me” is Jesus’ central call, while “I will make you fish for people” is the particular call or invitation.

Work is shifting in such a way that our theology of particular call may no longer be dynamic enough to include all the ways people work.4 When the Reformers wrote on vocation, people’s work looked very different than it does today. In fact, people’s work looks very different today than it has at any other time in history. In the United States, one such change is the shift toward independent workers, including independent contractors, freelancers, side-hustlers, temporary workers, and self-employed entrepreneurs. Studies estimate that in 2005 10.3 million people, or 7.4 percent of the workforce, was independent.5 That number has increased dramatically over the past decade. In 2016, between 40 and 54 million people were reported as active in the independent economy.6 This figure reflects 25 to 35 percent of the workforce. Experts suggest that these numbers could rise as high as 50 percent in the coming years. The church’s mental model of a singular, stable vocation is simply not calibrated for a system that includes so many people who work independently.

The shift in momentum toward independent work carries with it major adaptive challenges. Adaptive challenges are those problems that have unclear solutions—challenges that require people to wrestle with deeply held assumptions and experiment with new ways of being.7 The two most pressing adaptive challenges facing people who work as independents are that (1) the burden of risk transfers from the corporation to the individual and (2) independents need skills not emphasized in education or by the church.

First, as the economy shifts to include more independent workers, the burden of accountability for realities such as health care, insurance, privacy, finances, and even a steady acquisition of work shift to the individual. While third party platforms intended to support these needs are becoming more available, gaps in the systems and pressure on individuals remain. Is the church prepared to care for and meaningfully support people who are saddled with burdens that on the one hand threaten to overwhelm and on the other promise to accelerate?

Second, people charting their own course need skills not emphasized in education or by the church. Skills for success as an independent include things like collaboration, creative problem solving, self-awareness, ongoing learning, tolerance for ambiguity, and resilience.8 In other words, people need skills that help them work with others and thrive in the midst of failure and change. Is the church prepared to recalibrate its mental model of vocation in a way that prepares people to live out their callings while dealing with the realities of independent work?

In the midst of these adaptive challenges, we long for stabilizing voices and places. Shouldering more burdens and acquiring new skills will be painful for individuals. In this, our longing for Christ’s tethering presence will increase, not diminish. Because the narrative of Christ is both stabilizing and also completely disruptive, it can help prepare us for the changes that lie ahead.

BECOMING ENTREPRENEURIAL
The church must reshape its understanding of vocation and thus how it forms individuals for God’s call in a changing world of work. There must be an emphasis on people—who, whether by force or by choice, will have to chart their own course in work. We must embrace the practices and postures that help people thrive in a changing world. For these reasons, I investigated the practices of faithful entrepreneurs for my dissertation. Through a nominating process, 49 exemplar entrepreneurs were selected and surveyed, with 11 of those interviewed in depth. Their practices offer guidance for a church seeking to recalibrate in light of the adaptive challenges discussed above. I was encouraged by how simple and embodied my findings were. It seems that in the wake of massive change, we need not reinvent the wheel of how to behave. Instead, to become entrepreneurial, we need to lean deeply into qualities already present in our faith. Here, I want to highlight two: embracing failure and practicing empathy.

Embracing failure: In each interview, I asked how the interviewee had learned to define success and failure. The entrepreneurs I interviewed are objectively successful—founders of international NGOs, venture capital backed start-ups, and stable small businesses. Yet, when talking about success, nearly all were noticeably uncomfortable. Some even had a hard time articulating their thoughts. Most were unsure if they had even achieved success.

But when I asked them to talk about failure, every single interviewee loosened up. They talked openly and freely, easily recounting examples of how they had hurt people, lost money, or took a risk on an idea that completely backfired. Simply put, they embraced failure. Many felt that their experience of failure led to new life. In time, they had learned to have hope in the midst of loss.

As Christians, we are called to hope in the midst of loss. This is a central part of embracing the narrative of our faith, particularly the death and resurrection of Jesus. The story of the disciples on the way to Emmaus shows us how easy it is to get lost in loss. In the wake of Jesus’ death, the disciples grieved deeply. They had not imagined a dying Messiah. They did not expect this loss as part of Jesus’ promise of new life. In Luke 24:14, the disciples are so preoccupied by their loss of Jesus that they miss noticing when Jesus joins them on their journey. Jesus walked with them to Emmaus, yet because they had not expected his death, they were unable to experience the new life in their midst. It is not until the breaking of bread in verse 30 that the disciples were finally able to see that Jesus had been with them all along.

We will experience breaking bread moments in our vocations—times when God’s presence pierces our reality and helps call us toward particular tasks. But for many of us, breaking bread moments do not come that often. We thus must widen the ways we come to recognize how Jesus has been with us all along. Part of this is the need to expect and embrace loss in our work so that we might also experience the new life it can bring. As more and more people are charged with charting their own course, it is those who embrace failure—knowing that it holds layers of loss, hope, and eventually new life—who set themselves up for success and also for recognizing God amidst a changing world.

Practicing empathy: Becoming entrepreneurial involves practicing empathy. This was a common theme in both the survey and interview rounds of my research. Empathy requires us to bracket our own biases and emotions so that we might enter the world of another. Entrepreneurs know—and innovation literature validates—that empathy is the starting point for designing valuable products and processes. But for the faithful entrepreneur, empathy is also at the heart of what it means to be a good neighbor in this world. God calls us to love God with everything we have and to love our neighbor as ourselves. The parable of the Good Samaritan demonstrates both who our neighbor might be and what good neighbors do. In the story, we learn that the man on the road was attacked and abandoned. He was clearly suffering. Suffering is perhaps the most common experience among humankind. The fact that we all suffer helps us understand that anyone can be our neighbor.

If anyone can be our neighbor, then being a good neighbor means crossing the road, and this requires empathy. Jesus’ parable suggests that empathy, and thus neighborliness, are embodied in real moments with real people. We have to be on the road and readied in order to recognize our neighbors in our midst. The entrepreneurs I inter- viewed talked about empathically recognizing colleagues, family members, customers, and vendors. Their empathy was embodied in their listening ear, choices on behalf of another, advocating for others, and saying no. Although stories differed, each one involved the entrepreneur crossing the road for their neighbor.

As work shifts to include more independent workers, it would be tempting to become an even more individualistic society—to hunker down and drown in our own isolation. But if we follow the lead of faithful entrepreneurs, empathy can serve as a thread that weaves our stories with those of neighbors within our work.

THE WAY FORWARD
When Sarah’s job as an architect flopped, she experimented by sending out a graphic design portfolio she had built in college. One gig turned into many and today, she owns a thriving graphic design business. Whether by force or by choice, many of us will chart our own way forward in a changing world of work. There will be no shortage of technical obstacles and failures as we do. But there is also great hope for those among us who are willing to become entrepreneurial. The stories of the walk to Emmaus and the Good Samarian help us recognize that our faith prepares us to be on the journey. A church committed to its own recalibration for a changing world of work can start helping people become entrepreneurial by forming them to embrace failure and practice empathy. 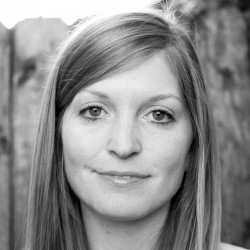 Michaela O’Donnell Long (PhD ’18) is Senior Director for the De Pree Center for Leadership and the owner of Long Winter Media.