In my backyard grows a beautiful Chinese Elm tree. Like most beautiful things, it is messy and comes at a cost. In exchange for its exquisite shade, all it asks is to drop its tiny leaves and branches everywhere all year long and to wrap its colossal root structure around any subterranean water source it finds.

The Elm’s branches give shade not just to my yard but to at least three neighbors—a fact that I always thought qualified me (and the tree) as neighborhood heroes. But, about a year ago, one neighbor threatened to ‘call someone’ if I didn’t have the tree cut back and out of his yard entirely. Exactly who he was going to ‘call’ I’ve never known—the “Tree Police?”

In a stirring new documentary, Won’t You Be My Neighbor? director Morgan Neville examines what must surely be one of the more impactful, yet curious lives of the 20th century, and in turn, unpacks what it means to be a neighbor in the truest sense.

For several generations of children spanning the 1960’s through the late 90’s, Mister Rogers was a counselor, a confidant, a guide, a friend, a surrogate parent, and ahem, a neighbor. For those of us who grew up with him and his perpetual public television show Mister Rogers’ Neighborhood, our trust and belief in him were absolute, even if the man himself remained lodged firmly in TV / childhood folklore.

Won’t You Be My Neighbor? reveals that all our suspicions were true—Fred Rogers could be trusted implicitly, and his onscreen persona and character mirrored that of the actual man. Furthermore, his devotion to children and truth-telling on their behalf qualifies him squarely for some elevated office of cultural saint.

Most documentaries of entertainment people follow a familiar arc—the innate talent, the singular devotion to craft and rise to fame. Then, the fall from grace and public favor, and the final esteemed place in art and culture, voiced by colleagues, artists, and frustrated spouses and lovers. Neville’s film reveals that Fred Rogers’ path was so very different, but equally fascinating. This gentle, musical, Presbyterian minister with a background in child psychology showed a devotion to his cause equaled by any actor, novelist, or rock and roller. The early scenes are stirring, showing Rogers ad-libbing on piano then looking squarely into the camera and speaking his manifesto—that children are capable of complex emotions, and what they desired was true, authentic, relationships with adults, not pies-in-the-face, clowns, cowboys, and nonsense.

For decades he delivered just that—real, trusting relationships with children everywhere—through the television. Yet, Rogers’ mystique was so singular, so free of selfishness and rank-and-file humanity that adults couldn’t help but ask just who was this person that half raised them, and might there in fact be something wrong with him?

The film picks at these scabs unflinchingly and brilliantly, with respect and candor. Who was this corny dude with his sweaters and sneakers and janky homemade puppets, psychedelic curtains, and whatever “Picture-Picture” was?

Was he some sort of religious nut? Did he somehow contribute to the self-centered nature of the world by telling us all we were special? Was he gay?

The answers are surprising and satisfying, thanks to the sure-handed narrative of the film, and the endlessly honest vignettes of the interviewees, each of whom deliver an almost dumbfounded appraisal that yes, Mister Rogers was like that in real life. They speak as if describing a supernatural phenomenon—some sort of public television comet that only passes through Earth’s orbit every thousand years.

Fred Rogers’ “ministry” existed squarely in the intersection of the present, fallen world and the perfected Kingdom of God, which Christ strove endlessly to describe for us and His followers. Jesus spoke of a time to come, but also one that was here and now, beginning to change hearts and minds, to change our very humanity and reality and write us into new narratives. Christ existed in our natural world, but lived as somebody who was creating a whole new world.

Rogers anchored himself firmly in his times, addressing the subject of ‘assassination’ after the death of Bobby Kennedy, inviting racial integration in the kiddie pool in his front yard, and speaking to young and old alike after 9/11, only after he was begged to do so. Yet, his countenance and behavior always pointed to a new world, of things seldom talked about with young people. He believed unflinchingly in the concept of love, and held space for frank conversation about divorce, money, music, and the ‘okay-ness’ of things like fear, wonder, confusion, and loss. The authentic nature of his persona emanated hope, even in the face of disrepair. In the terrifying world children often face, he pointed a way to safety.

Famously, Jesus was cornered at one time and asked about “the greatest commandment.” Instead of one answer he gave two—love God with every fiber of your being, and love your neighbor as yourself. The follow-up question is one we’re still asking; “Who is my neighbor?” In other words, what boxes do I have to check, what types of people do I have to love, and which ones can I ignore, unfriend, unfollow, unlike, etc.?” On the heels of this rather self-centered question, Jesus delivers the parable of the Good Samaritan.

For Fred Rogers, the literal “neighborhood” onscreen was small—fabricated miniature houses, a red trolley (with its own awesome theme song), and a land of make-believe. The figurative neighborhood outside the television studio was boundless, welcoming all children, all people. Rogers wasn’t perfect, but it’s difficult to find a better example of someone who was a unifying, calming presence for so many.

The film’s third act poses a fascinatingly dark question, which is essentially, “Did Fred Rogers, for all the good that he did, even make a dent in this world?” When we look honestly at where we’ve gotten to—the divisiveness, the rancor, the constant celebration of self and outrage—did the children of Mister Rogers’ Neighborhood grow up to make any kind of discernible difference in the world?

It’s a sobering challenge, paired brilliantly with images of Fred looking pensive and forlorn under overcast skies on a windswept seashore.

It’s a question that the honest Christ-follower often asks: “Is this having any effect, really? For all our study and prayer and service and denial of self and worship and giving and trying to enter life’s experiences through narrow gates, is the world changing? Even a little?”

There is an open opportunity to despair in these questions, and the film challenges us similarly. If Fred Rogers, who was this bizarrely elevated man, couldn’t move the needle, what chance do we have at redemption, at change, at progress?

Alas, Christ didn’t promise such a reward. At the conclusion of the Good Samaritan story, not everything was put right. The racial hatred and self-centered nature of that society remained, just as it does in ours. The Samaritan didn’t seem to receive any special award for being kind, for noticing, loving, and restoring his neighbor. He did, like Fred Rogers, win a unique honor in history as someone to emulate.

Although a ‘fixed’ world was not and is not the reward, nevertheless the elusive Kingdom of God is ushered in at these rare moments of kindness and holiness. This is where Fred Rogers spent his life. It’s there we find the pulsing glow to emulate in our own lives. It’s likely that Rogers found the same promise that we find when we dwell in kindness, love, and a willingness to walk with people on even the rockiest of roads: “Do this and you will live.” 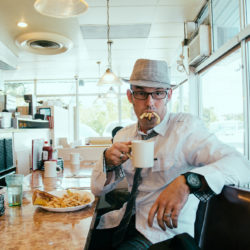