After reading David Johnston and David McAllister-Wilson’s thought-provoking articles, I would like to respond by reflecting on the difference between high-level interfaith dialogue and grassroots dialogue. Currently, while the media’s attention in Syria is focused on peace talks in the political fora, there are local community groups negotiating with one another for safe passage, humanitarian aid and ways to co-exist during difficult days. When reading about historic church schisms in the Middle East, between Orthodox, Catholics and Protestants, I am reminded that Middle Eastern Christians have long lived side-by-side.1 While priests and pastors may have struggled to find common ground with one another, more often than not two Christian neighbors from different denominations regularly became friends by sharing a cup of sugar.

Similarly, interfaith dialogue happens every day when two people from different religious backgrounds learn to co-exist. This has been happening between Christians and Muslims for 1500 years in the Middle East, and it is now starting to occur in historically Christian countries.

When I was researching religious identity in Syria, I interviewed dozens of Muslim women who were proud to tell me that they have Christian friends who they visit on Christmas; then, their Christian friends come over to their house for a visit on Eid. A nurse told me that she always works on Christmas and Easter so that her Christian colleagues can take a holiday, and they return the favor on her holidays. Similarly, Christian and Muslim women in the Middle East may send their children to the same schools, shop at the same stores, endure the same electricity cuts and political pressures, and even have crushes on the same movie stars.

It would be ingenuous to suggest that interfaith dialogue at the grassroots level is perfect and that everyone always gets along. But sometimes we get caught up in dialoguing about what we believe and why we disagree, rather than simply living life side-by-side.

McAllister-Wilson presents a useful framework for considering inter-communal encounters in his description of how we move from “cooties to crushes.” Sometimes a long-term romance flourishes as a result of these encounters while other times friendships bloom. Friendship is not just a nice coincidence; for many people, it is the heart of dialogue. Feminist identity theory argues that women tend to define themselves in terms of relationships. Indeed, for many people, decisions are made with the interests and pressures of others at the forefront, and values are more strongly influenced by affinitive relationship than by any rational argument or conviction.2

When we look at global inter-faith dialogue, women are conspicuously absent from most visible fora. Women’s voices are rare in inter-faith publications and their faces are missing from the photographs taken at many high-level consultations. Nonetheless, women are dialoguing about shared interests, including the need for justice in their communities, as well as seeking to build structures that support the best interests of their families.3 I agree with Johnston that it is not realistic to suggest that neither evangelical Christians nor equally fervent Muslims will give up their universalist beliefs for the sake of dialogue. Having said that, there are so many things we can dialogue about other than beliefs! Let us not lose sight of this, because in celebrating our diversity, there is space to also celebrate our commonality.

I am reminded of how I met my dearest Muslim friends. On a long ride in a shared taxi during Ramadan, a young woman and I started talking about fasting including why we fast, what our respective religions teach about the practice and why we love these religions. We agreed about many things but also disagreed quite a bit. At the end of three hours in a cramped car, she invited me to dinner. This was the beginning of a precious friendship with her and her sisters. She did not care that we had as many agreements as we had disagreements; she was just glad to have a conversation with someone different from her. She was surprised I was willing to be her friend and I was, frankly, surprised she was willing to be mine. Yes, we talked about religion, but we did so because it was something to talk about, not because our relationship hinged on mutual accord or discord.

In London, where I live, I walk by a school on my way to work in the mornings. I live in an extremely diverse community, with Muslims, Christians, Hindus, atheists and adherents to various other belief systems. As parents wait with their children outside the school for the gates to open each morning, I see that diversity. Sometimes I see two eastern European mothers chatting with each other, and across the street two Arab Muslim mothers doing the same. Yet other times, I notice parents talking with people who look very different from them. Who know what they are discussing—perhaps their children’s upcoming play or the volunteer roster for the school. Perhaps they are talking about planning a clean-up campaign for the nearby camp or sharing ideas about how to shop due to an increase in prices. Or perhaps they are talking about religion. Regardless, the important thing is they are communicating and as they do so—while watching their children play on the playground— they cannot deny their commonalities.

I understand that many American evangelicals feel fear when considering friendship with Muslims. But my dear friend whose story I shared above told me she used to be scared of Americans like me, too. Grassroots dialogue, a dialogue built on friendship and common interests, is an important first step to breaking down that mutual fear. 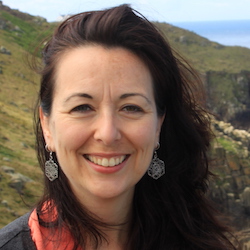 Kathryn Kraft is Lecturer in International Development at the University of East London and Head of Research for Served. With a PhD from the University of Bristol and an MA from the American University of Beirut, she has nearly 15 years of experience in research and humanitarian aid in the Middle East. She teaches and researches on faith and humanitarianism, storytelling in conflict transformation, NGO management, and inter-communal dynamics of the Arab Middle East.