Tanya Riches is engaged in an important project, and from her place in the Hillsong worship movement, she is the right person to pursue it. She wants to know: To what extent can exposure to the arts, and to the art of music in worship in particular, move participants to more openness to their neighbor? Can this happen if that neighbor should be a person of a different faith, or even someone considered an enemy? Given the challenges that interfaith relations face in our contemporary world, the attempt to answer these questions could not be more timely.

As she acknowledges though the place of art in Christian worship is not new, the prominence of the worship arts, especially in Protestant churches, has only recently become a topic of study. And it is a topic that is still fraught with controversy. There are many who are critical of megachurches and their music, as offering a performance and entertainment, not serious worship. There are also those who are skeptical of the use of art technologies of screens and lighting as mere spectacle. But thankfully we are beginning to realize that every worship experience features some form of performance and entertainment, often ill-conceived and poorly presented. And every worship experience has visual and aural components that elicit aesthetic response, whether they are intentionally artistic or not. We can be grateful for the developments, especially in worship music, which she documents, and the evidence she presents for the value of this new worship experience. Clearly, megachurches like Hillsong have been influential well beyond their Christian communities. And this is true of megachurches around the world. I have visited megachurches in Accra, Ghana and Nairobi, Kenya where music has had a deep cultural impact.

But since we are still at the beginning of a complete understanding of the impact of these arts on worshippers, I want to frame my response to Tanya’s proposal in the form of a series of questions. First, what are we talking about when we talk about the experience of “art” in worship? In my own reflection on these things I have come to feel that we need to broaden our focus from “art” to a discussion of the aesthetic response to all the elements of worship. I think there are two reasons for making this expansion. First, for some people, “art” is a problematic term. They are put-off, and react by thinking, “I am not an artist, I don’t know art,” or worse, “art has no place in the church anyway.” Secondly even when visual art or music are present, their impact is always and necessarily, part of a larger experience that has aesthetic impact. Often this involves things that we do not associate with the arts at all, like kneeling, lighting candles, or raising one’s hands. These things experienced together contribute to an experience that is, in part, aesthetic.

This leads to a further query: But how does one define what we mean by an aesthetic experience? Riches provides some helpful suggestions in proposing that we think of elements that spark affect, yet in another place she connects this with emotions—a linkage that she acknowledges raises problems for some people. I have been helped by Frank Burch Brown’s discussion in his book Religious Aesthetics, where he wrestles with this question in an attempt to create a more capacious definition of aesthetic experience than that associated with enjoying art in museums or concerts. He proposes this definition: “All those things employing a medium in such a way that its perceptible form and ‘felt’ qualities become essential to what is appreciative and meaningful.”[1] This broadened definition allows us to pay attention to the many elements that go into making worship impactful.

But how do we measure and assess the impact of the arts, or aesthetic experience in worship? Here Riches is also helpful in suggesting some form of primary research: we need to ask people about their own experience in worship. As she would no doubt recognize, asking only worship leaders limits the breadth of response required for such a task, though that is a good place to start.

In my research I have used lengthy open-ended interviews, both with worship leaders and congregants, regarding the visual elements and images in worship. Interviewing both leaders and worshipers was important to discern whether there was (or was not) a correlation between the intention of the leaders and the experience of people in the pews. One particular response was revealing. When we asked what part of the service moved people most deeply to feel close to God, the overwhelming majority of the responses were emphatic: music, either sung or performed. No other response came close. This was unexpected because we had not asked about music at all in the protocol! Only one person mentioned the sermon and that was in connection with being reminded of it based on something they sang! Surely this indicates that even biblical truth, and teaching, must at some point, take on aesthetic form to become remarkable.

But this leads me to wonder: what is significant about the fact that when we speak about art in Protestant settings, we mostly mean music? A study done in the early eighties asked Catholic, Orthodox and Protestants about their experience of art in worship. It turns out that Protestants had more regular experience with arts in worship than either Catholics or Orthodox, but their experience was almost exclusively of music. Though the others had rich traditions of visual arts, this did not impact them in the way music effected Protestants. The study concluded by pointing out that their week by week encounter with music was probably the primary Protestant experience with “art”. This lends weight to the study that Riches is proposing. But it has also led me to wonder if our exclusive aural focus has eliminated other possible means (visual or kinesthetic) by which worshipers may be moved?

Given that, we have yet to face the central question Riches raises: How does the impact of music (or other arts), however understood, move people to action? Riches found specific songs that respondents reported moved them toward openness to others. But it is interesting that it was the lyrics that were highlighted, signaling that, while aesthetic form (music) creates the impact, it is verbal reflection (lyrics) that motivate movement. In fact, I think given the varying responses people have to music, it would be difficult to specify in any detail the particular actions that songs might motivate. Further study is clearly called for and may prove that suspicion wrong.

Finally, I want to raise what is the most important question of all, the theological one: How is God by the Spirit at work in the experience(s) of worship? Here I would argue that the Spirit works though a vision presented of the new life Christ brings, and the larger new creation this opens up. Notice I use “vision” intentionally as the imaginative space opened by the entire experience of worship in all its elements. In my recent study of Reformation rhetoric I found that the major reformers (and John Calvin in particular), making use of classical forms of rhetoric, believed the Spirit worked through preaching as it embodied a unique biblical rhetoric that called for active response, faith and involvement in the drama of the new creation. This clearly had a horizontal as well as vertical dimension, something I have described as centrifugal (in contrast to the medieval worship which was centripetal), that sends hearers out into the world. And singing the Psalms was a vital attendant and carrier of this spiritual rhetoric. Though there are variations on this theme, I believe the preaching tradition deriving from the Reformation, and its attendant musical and liturgical elements, is the indispensable source for the vitality of the Protestant movement. And I like to think that the best art (whether popular or not) will be that which carries this biblical call—to new life in Christ, new creation, or fulness of the Spirit. But we have more work to do to explore this claim. Meanwhile pay close attention to what Riches and her Hillsong colleagues are doing to explore these questions. 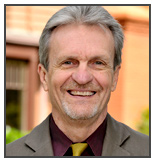 William Dyrness, senior professor of theology and culture, joined the Fuller faculty in 1990 and served as dean of the School of Theology from 1990 to 2000. He teaches courses in theology, culture, and the arts, and was a founding member of the Brehm Center for Worship, Theology, and the Arts.