“Having been warned in a dream, he went to the area of Galilee. He settled in a city called Nazareth so that what was spoken through the prophets might be fulfilled: He will be called a Nazarene.” —Matthew 2:22-23

Every student’s nightmare (just in time for final papers): You can’t find the reference for that perfect quote. You know you copied it from somewhere. You are sure that it’s accurate. You just can’t find the citation and it drives you nuts. So, do you just throw in the quote and hope that nobody looks at the footnote? (Not if you are a Fuller student!)

It appears that that is what Matthew did here. You see, try as they might, no one has ever been able to find exactly where this prophecy was “spoken through the prophets.” There isn’t any verse in any of the prophets that says, “The messiah will be called a Nazarene” (or even anything vaguely like that). So, did Matthew just make this bit up?

Or could there be something else?

Well, when would a prophet use a pun? When would a gospel writer use a play on words to make a most unexpected point? What better way to tell of the birth of a different kind of king than for the oracle to make a little literary mischief?

Most scholars today think that Matthew was using a kind of play on words on Isaiah 11:1. The word for “Nazarene” has the same root as the word for “branch.” The point being that the Messiah not only would be from a family tree that is rooted in Israel, but comes from a most unexpected and barren branch.

Out of the stump of David’s family will grow a shoot—
yes, a new Branch bearing fruit from the old root.

Like Sarah giving birth at a stage when even menopause was a distant memory, the Messiah would come from a human lineage that left no doubt that God was involved. It would be impossible, unthinkable, even unimaginable. Like from a virgin.

What better way to show that the old barren vine that was Israel was now becoming an unexpectedly, impossibly fruitful bearer of grapes—with new vines grafted in, with new varieties of expressions of the Spirit, with new wine that will make the world glad?

What better way to mark the unmistakable presence of God in our midst?

May this Advent be a time of preparation for the most unexpected incarnation imaginable. And may you find yourself caught up in the wonder of one who brings life out of death, light out of darkness, and fruit from the barren stump. 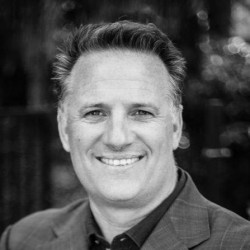 Tod Bolsinger joined Fuller as vice president for vocation and formation and assistant professor of practical theology in 2014, after serving in pastoral ministry for many years.