The Sisters Brothers stars Joaquin Phoenix and John C. Reilly as a pair of brothers, last name “Sisters,” who work as hired assassins for a wealthy man they call the Commodore (Rutger Hauer, seen but not heard). We meet them first as voices and gun blasts in the middle of the night. They have just cornered their latest quarry, and while they complete their mission, things don’t go exactly as planned. Not that the brothers plan anything exactly. They just kind of go and do, and they’re better than most at going and doing what they do, which is dealing death.

The story really kicks off when they’re given a new mission by the Commodore to kill a prospector (Riz Ahmed, suspiciously charming) who has run off with something of the Commodore’s. They don’t specify what exactly, though the brothers aren’t prone to asking too many questions. A tracker (Jake Gyllanhaal, proper) has gone ahead of them to find the rogue prospector, though the two soon become bosom buddies, and the Sisters brothers find themselves chasing down two men instead of one. So we’ve got a Western and a road movie and a pair of buddy comedies all wrapped up into one with a sprinkling of mysticism and absurdism to boot.

This isn’t the anesthetized West of Hollywood’s Golden Era. It’s dirty and bloody like those non-nostalgic, late-70s and early-80s Westerns that were either the nadir or the high point of the genre depending on whom you ask. Think McCabe and Mrs. Miller, Heaven’s Gate, or Pale Rider and you’ll be on the right track. Though The Sisters Brothers carries itself lighter than those films and is more fun for it. It’s kind of a 90s hang-out movie too. It’s just a good time at the movies that occasionally makes you squirm. 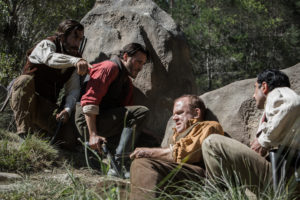 The cast is a big part of what makes this movie great. I can’t think of two living actors who better embody loneliness than Reilly and Phoenix, and they process it in such different ways. Reilly goes soft and ingratiating; Phoenix gets abrasive and rowdy. It’s the same wound though. Pairing them and having them both be the only balm the other knows makes for great tension on screen. Gyllenhaal is good as the tracker, and maybe it’s the P.T. Anderson residue on Reilly and Phoenix, but I kept wishing the late Philip Seymour Hoffman was in that role. His character’s loneliness is key to the story as well. The terrific Allison Tolman also shows up in a brief, nameless, thematically-pivotal role. Watch for her.

At its core, writer/director Jacques Audiard’s American West is a lonely place where no one fits, and the only option men and women have for carving out a niche for themselves is to do so chopping into society, gouging out a groove, and holding onto it via the careful employment of further violence. Tenderness is the most precious thing there is in this world, and its scarcity prompts people to shy away from it when they encounter it. Being reminded it exists makes living in the rough world too difficult.

Without spoiling anything, I’ll say that the most remarkable thing about The Sisters Brothers is how it ends. I was so convinced by its vision, I didn’t think the film could possible end the way it does. Then it does, and I was aghast.

When the movie started, I noticed how the lights in the theater slowly dimmed until the only illumination was the projected blackness on the screen. Then the screen was filled with light so bright I could hardly see for a moment. And then shapes became distinguishable, and I entered the world of the film. I wondered if that’s what death is like. Everything fades out and only a memory of light remains. Then something new comes into focus, something too bright and real to be believed at first, but then it takes over everything. I imagine then that the trials of this life, which seem so inescapable and powerful now, will be supplanted by an incomprehensible peace, too good but absolutely, irrefutably true. Another world like this one but not, existing alongside it, available anytime if we’re willing to abandon our despicable ways and accept it. Some of us will get there by choice. Some by necessity. Some whether we like it or not and maybe we’ll have to leave a piece of ourselves behind. But I believe we’ll get there. I do. And movies like The Sisters Brothers help me believe.