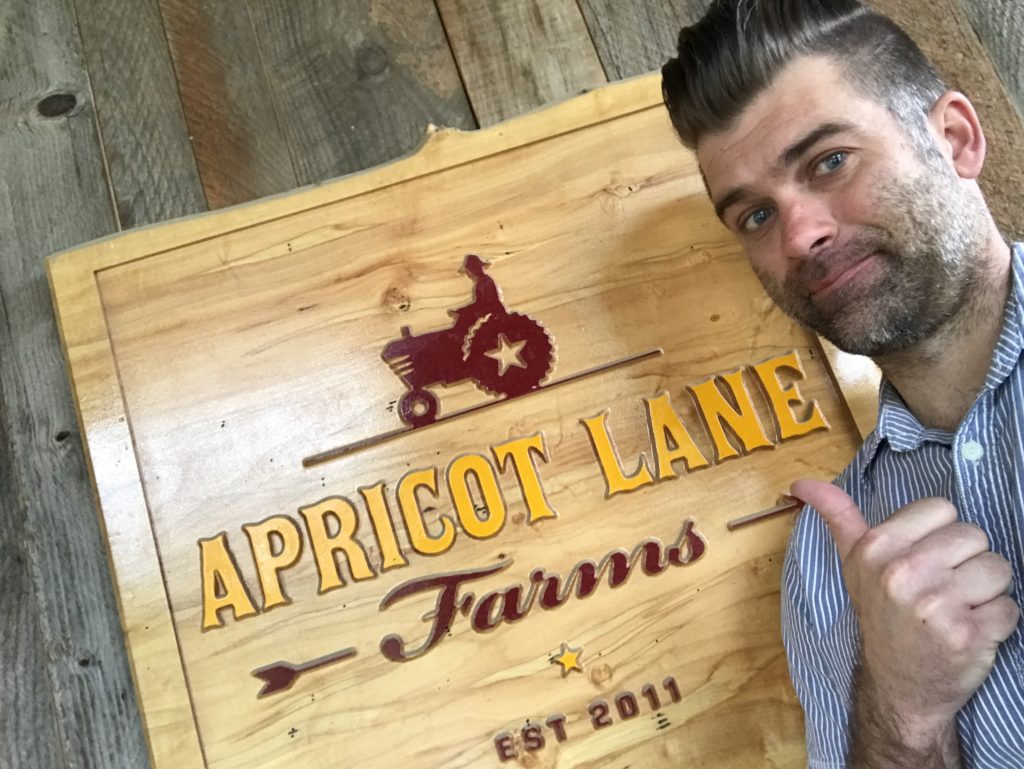 “What is the kingdom of God like? To what should I compare it? It is like a mustard seed that a man took and sowed in his garden. It grew and became a tree, and the wild birds nested in its branches.” – Luke 13:18-19 (NET)

There’s something wildly subversive about what John and Molly Chester are doing with Apricot Lane Farms. And it’s not simply because their approach to regenerative farming embodies a critique of the large-scale monoculture that characterizes modern industrial agriculture. Like an unassuming little seed lying dormant under an otherwise lifeless landscape, the subversion is planted much deeper, hidden beneath the soil.

Of course, at first blush, you wouldn’t know it. Take a tour of Apricot Lane like I did, and what you’ll find is nothing short of an endearing homage to all that’s right with rural life. What’s more, it’s super cute. From the meticulously manicured garden, to the expertly designed orchards, to the newborn sheep trampling the ground beneath the lemon trees, it’s something straight out of a Chic & Country magazine spread.

But follow Molly and John behind the doors of the farm’s fertility center and a whole new world of soil and worms and micro-organisms opens up. Suddenly, the two tour guides are no longer a couple who simply chose to leave the city behind for a more whimsical life in the country. Rather, they are evangelists preaching the gospel of regenerative soil, biomimicry, nutrient-dense foods, and, above all else, ecological interconnectedness. Oh, and as they hold aloft handfuls of microbe-rich soil from their vermicomposting bins, it becomes clear that they also have a deep and abiding passion for worm poop.

John and Molly’s undying commitment to the health of our soil and, by extension, the vitality of the earth as a whole, is clearly on display in The Biggest Little Farm, a new documentary (written and directed by John) that follows the Chesters as they transition from living as a filmmaker and private chef to a husband and wife team of farmers (who still make films and cook traditional foods on top of it all). In more ways than one, it’s an enchanting and uplifting film, in large part because, even with the numerous difficulties they face learning how to form a mutually enriching relationship with the untamed and unpredictable land, the setting is picturesque and John and Molly exude nothing but gratitude, not to mention a hard-won appreciation for the fragile intricacies of life. If for no other reason, everyone—adults and kids alike—would benefit from seeing this film (the PG rating helps).

But something else is going on just beneath the surface of both the film and the farm. If you stop, look, and listen long enough, you just might catch a glimpse of it. For instance, near the end of the film, John offers up a piece of wisdom borne from the intimate relationship he has cultivated with the land over the preceding eight years of trial and travail: “Observation followed by creativity is becoming our greatest ally.” When I asked John about this comment and whether it perhaps serves as a motto not just for his farming, but for his way of being in the world, he responded with a resounding yes. But then he made one slight amendment: “Observation followed by creativity leads to humility.”

To be honest, if anyone is looking for a rule of life, I’m not sure I could come up with anything better. It’s a piece of wisdom that is profoundly simple, but, at the very same time, world-shattering. Indeed, although John and Molly don’t profess any kind of Christian faith, the lived-wisdom they have stumbled upon by simply observing the structure and workings of the created order is strikingly similar to the sage advice that was spoken long ago by a teacher who was also quite fond of observation, creativity, and humility: Jesus.

The suggestion that two people who are not followers of Jesus could tap into the same stream of wisdom as Jesus might come as a bit of a surprise, but it shouldn’t. After all, Jesus himself rooted his life and teachings in the Hebrew wisdom tradition—a way of life grounded in careful observation of the created order. From this perspective, to pursue wisdom was to pursue that which had been present since the dawn of creation (Proverbs 8:22), and was woven into the fabric of the natural order (Proverbs 3:19). It was readily available to anyone who had the eyes to see it.

But Jesus didn’t simply regurgitate the wisdom he inherited. He got creative with it. Jesus didn’t just spin folksy tales. He told parables—world-changing, paradigm shattering, topsy-turvy stories about the Kingdom of God. Imagine that. Jesus was the fullest manifestation of God’s revelatory presence in human history, and of all the ways he could have communicated with us about the coming Kingdom, he chose to tell stories—stories about seeds, and birds, and trees, and unplowed fields, and baking bread.

In other words, Jesus told stories about the everyday, mundane elements of pastoral life. His parables focused on farming and cooking and dealing with livestock. But they always had a twist that reoriented (or perhaps disoriented) his listeners. Extravagant parties are thrown for foolish and ungrateful sons. Entire flocks are abandoned to find a single wayward sheep. Wedding guests who fail to RSVP are uninvited in order to make room for the outcasts living on the margins of society. And mustard seeds are planted, growing into trees in which birds are able to nest.

When it comes to The Biggest Little Farm, the mustard seed parable is particularly illuminating, but not for the reasons one might imagine. Jesus’ listeners, connected as they were to the land, would have immediately caught the scandalous nature of his parable. In the first place, they would have known that mustard plants don’t grow large enough to support birds, so at the very least, Jesus’ parable would have been understood as an exaggeration, a way of highlighting the extravagant nature of the kingdom. But perhaps even more important, mustard plants were incredibly fast-growing and could take over a field in a fairly brief period of time. In other words, they were weeds. Or at least, that’s how they were envisioned by those who sought to control the land, to domineer it and force it to produce only one kind of crop.

But as I learned from Molly and John while traveling with them through the biodynamic orchards of Apricot Lane Farms, there really is no such thing as a weed, at least not when the farmer’s aim is to collaborate with the land so that it yields life rather than coerce the land into the production of goods. There are of course certain plants that run the risk of choking out others in the garden, but that’s not because they are “weeds.” That’s because the land is crying out. When a particular plant has run amok, it is both a sign and symptom of a deeper and more pervasive imbalance in the ecosystem. The farmer can choose to rip it out and kill it. Or she can observe its growth, get creative, and respond humbly to that which she must acknowledge is always already out of her control.

In light of these biodynamic farming insights, might we say that the Kingdom Jesus proclaimed is one in which we no longer remove the various “weeds” we have named as threats to our pristine gardens, but instead allow these plants to flourish and grow? Could it be that, in the coming Kingdom, there simply is no such thing as a weed, not because life is easy and without thorns, but because every living thing has a vital role to play? If so, that would require us to adopt not only a new way of seeing the world, but a new set of eyes.

To see the world in this way—with kingdom-oriented eyes—is to look at the beautiful complexity of the land, which can be harsh and unforgiving, and see that it is alive with infinite possibility. It is to envision the world as John and Molly do in the film—to look at the coyote and see, not a killer of chickens, but an ally against gophers; to look at maggot-filled cow dung and see, not the source of a fly infestation, but an excellent source of chicken feed; to look at a plot of land an hour outside of LA and see, not a dry and barren wasteland, but the site of a regenerative farm. As John says, “when I look at it like that, it’s perfect.”

Like any great story, the story of Molly and John’s farm isn’t simply about farming. It’s about learning to see differently. It’s about acknowledging that, no matter how large a particular plant becomes, or how expansive its root system, unless we train our senses in very particular ways, all we will ever be able to see are slightly overgrown shrubs or, worse yet, weeds that needs to be eliminated.

And this is precisely the gift that The Biggest Little Farm offers to viewers—a new way of seeing and thus understanding our relationship with the soil beneath our feet. In doing so, it doesn’t merely function like a parable of the kingdom. It is a parable of the Kingdom.

If this is true, then what might we say the Kingdom of God is like? To what should I compare it? The Kingdom is like a handful of seeds that a husband and wife took and planted in a garden. They grew and became the biggest little farm, and the native birds, plants, and insects returned to nest in its naturally diverse habitat.

Kutter is an assistant professor of theology and culture