I love movies kind of like I love my family, which is to say, for better or worse, we’re stuck together. I didn’t choose them, and they didn’t choose me. Sure, I can ignore them if I like, but that doesn’t make them go away. They’re still out there, and given the rhythms of my life and our shared histories, sooner or later we’re bound to run into one another again.

Mostly, I’m grateful for my family, err, for movies. They’re been a key source of growth and emotional and theological impart into my life. I am better for our continued relationship. Also, the times when films have been hardest to love have often turned out to be the times I’m most impacted by them in the end. Million Dollar Baby, for example, has gone from being the most maddening movie-going experience of my life to being one of my most treasured filmic friends. The difference maker in our relationships has been our commitment to one another – I didn’t give up on it, and it didn’t give up on me. There is no substitute for faithfulness.

In the interest of not carrying the metaphor too far, allow me to get to my point. There are some films that just don’t click for me for various reasons. Try as I might, our relationship just doesn’t work. I saw two such films on day four of Sundance – Wish You Were Here and Predisposed.

Wish You Were Here is an Australian film starring at least one actor you’d probably recognize (Joel Edgerton, Warrior) and possessing production value very much like the films you’re used to seeing at the local megaplex. The story is about two couples who vacation together in Cambodia. Only three members of their party return to Australia though, and everyone is harboring secrets. Their relationships unravel as they fight to hide the truth from their families, the authorities, and each other. The film is very well put together, well acted, and the way the mystery is solved is compelling. Wish You Were Here was the most “Hollywood” of all the films I saw at Sundance.

And yet, I did not like this movie for the simple fact that I find it insurmountably difficult to care about wealthy people who do drugs and have affairs while on South-East Asian vacations. Their problems, I figure, are their fault, and they ought to weather the disastrous effects of their selfish, unloving actions. 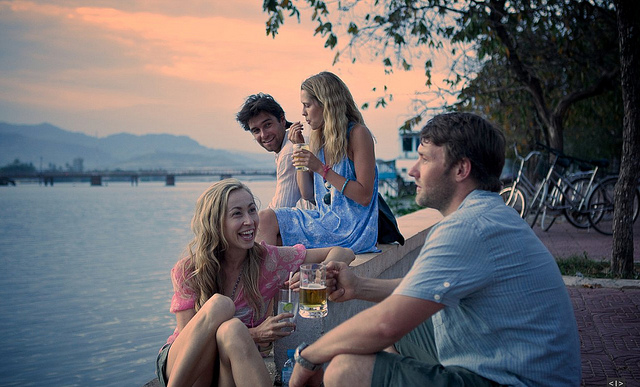 The second and final film of my day was Predisposed. Sundance isn’t just plucky indies in competition for the grand prize. It’s also a place where bigger name films premiere. Predisposed was a premiere. It stars Jesse Eisenberg, Melissa Leo, and Tracy Morgan, and it will be in your local theater sometime this spring, I’m sure. Predisposed is a comedy about a young man who is trying to get his drug addicted mother into rehab, so he can make an audition for a prestigious music conservatory. He gets caught up with her drug dealers in the process and hijinks ensue.

I found the film manic, tedious, boring, and unfunny, but many, many other people in the audience liked it quite a bit. The 1200 people in the auditorium were laughing. Granted, I was predisposed (ha!) to not like this film, as I do not like movies where everyone yells at everyone else all the time, and that’s what happens in Predisposed. I was also on the front row of the theater, so I felt a bit overwhelmed by this loud, nervous movie full of close-ups and twitchy, clingy characters. I actually left the theater as soon as the film ended, because the film’s co-directors consistently talked on top of each other and nervously moved around just like all the characters in the movie. I needed peace. I needed room to breathe. Some people really like that kind of awkward, cringe-filled comedy. I’m just not one of those people.

I did, however, have two good conversations later that evening about both films with other Fuller students in the Sundance class who liked Wish You Were Here and Predisposed because “selfish actions had consequences” and “the move was funny,” respectively. If you see either of these films and enjoy them, let me know what you enjoy. I’m always eager to like more things.