Nights are short and mornings come early during the festival. In an attempt to squeeze as much out of the experience as possible, many of us try to schedule late and early films. My time in Park City can probably be summed up in the motto I adopted for the week – “Drink coffee. Watch films. Repeat.” 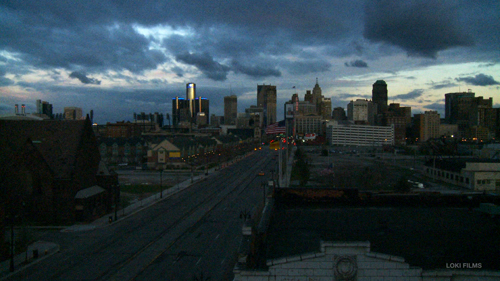 Day two began with Detropia, a documentary focusing on the city of Detroit. The film explores the lives of a few of the city’s residents including an auto worker’s union leader, a night club owner, a blogger/waitress, the city’s mayor, a young artist couple, and a few young men who salvage scrap metal from dilapidated and destroyed buildings. The film lacks a strong narrative push as a whole and in the lives of the individuals it examines. Instead, Detropia acts as a snapshot of the city as a whole zeroing in on the problems facing the dying megalopolis.

I adore documentaries like Detropia that focus on a place more than a specific person or problem. I always feel like I’m being allowed to wander the streets and observe the day to day lives of the people who inhabit them. It’s cinematic people watching, and it’s more intimate than I could be in real life. (Wandering city streets and interacting with random people is one of my favorite real life pastimes as well.) I don’t think that anything really exists beyond people and relationships. Every city, government, company, church, or civic organization is really just a collection of people mutually committed to perpetuating their relationships with one another, and so I seek the truth of a place in the lives of the people who live there. 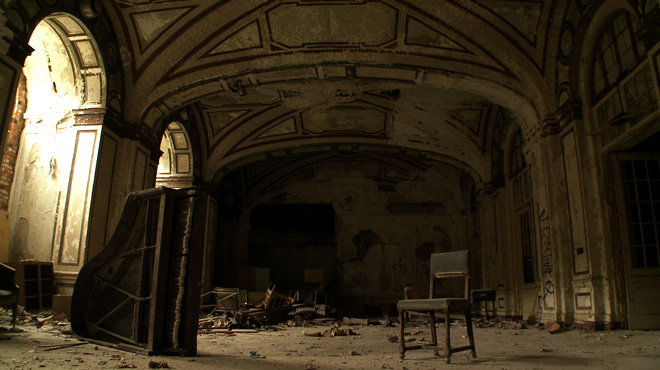 Detropia doesn’t really offer any solutions to Detroit’s many problems. Instead, it focuses intently on what is broken and on the small glimmers of hope shining in the lives of the people trying to ensure the city’s survival. I was particularly moved by the twenty-something artists who have moved into the abandoned city center to try to fill that decrepit place with life. In an obviously staged, but nonetheless poignant moment of the film, an opera singer explores an abandoned, graffiti-ridden train station. Standing in the main hall, he begins to sing, and his voice inundates that broken place with beauty which floods out across the city. Filling what’s broken with beauty, making all things new – that’s the gospel, and Detropia leaves no doubt that Detroit needs people committed to the gospel to fill it with the beauty of Christ.

Between the first and second films of my day, the Fuller contingent of the Windrider Forum had the honor of hosting Bishop Gene Robinson and Mackey Alston for a too-brief conversation about the issued raised by their documentary, Love Free or Die, which we had all seen the night before. I wrote about this conversation in the previous day’s post, but I will say that I felt very privileged to be part of that conversation. These types of interactions are what set Fuller apart from other schools. We are willing and eager to engage with people from across the wide spectrum of the Christian faith, and while we may not agree, we are always willing to talk and build relationships.

Following that conversation, we all hurried to get to our screening of 5 Broken Cameras. This film was constructed by editing together over five years of home videos filmed by a Palestinian man living on the Palestinian side of the wall separating Gaza from Israel. The amalgamated film chronicles the struggle of the man and his community as they (mostly) non-violently protest the ever encroaching Israeli settlement of what they consider their land and the subsequent forward movements of the wall. To call the film “intense” is a remarkable understatement, and especially when their protests begin to include their children and increasing violence on the part of the Israeli military.

My tendency is always to take the other side of any argument, so when I watch a very pointed documentary like 5 Broken Cameras, I try to notice what is being left out or misrepresented in what I am being shown. For instance, in this film, the Israeli military is shown constantly firing their weapons at the Palestinian protestors. These appear to be regular rifles, but Palestinians are rarely injured and almost never killed. This means that the Israeli soldiers are either the most terrible shots in the world, or they are firing rubber bullets. This is never addressed in the film. Also, the camera is frequently behind the Israeli soldiers as they push back the Palestinian protestors, so the cameraman must have had some special permission to be filming as he was which casts doubt on the “amateur” nature of this film. Indeed, in defending himself against Israeli troops at one point, he calls himself a “journalist,” so his filming seems to have been with purpose from the beginning.

Nevertheless, 5 Broken Cameras is a compelling film, and it sheds much needed light on the Palestinian conflict. I especially appreciated the filmmaker’s reason for always having his camera running as they protested. He says, “If we forget what’s hurting, we can never heal.” His film pays attention to the mess of his community’s life, and in doing so, calls for help. There is tremendous hope in this film, because true hope takes seriously what is broken and then works for something better, much like Detropia focused on Detroit’s desperation.

This is what I love most about documentaries – they help me to better see my world, and in seeing it better, I am able to love it better. This is the calling of ever Christian, to do the same as God and love the world and give our lives for the redemption of the world. We cannot fix what we cannot see is broken.