In my “trailer talk” review of the final theatrical trailer for this film, I wrote that Spider-Man: Homecoming appeared to be operating as a triple-entendre. “Homecoming” simultaneously refers to the homecoming dance, the Spider-Man character returning “home” to Marvel studios, and Peter re-encountering the lesson he learned at Uncle Ben’s death in previous iterations, that with great power comes great responsibility. My assessment was pretty correct, which speaks to how thoroughly (some would say too thoroughly) the trailer reveals the film, more than any special intuition I have.

What I did not expect of this film was how deftly and carefully it balanced these three elements. When I say balanced, I do not mean that it gave them all equal time and energy. On the contrary, it gave each of them as much as was necessary to make a fresh, interesting Spider-Man film that keeps this Marvel Cinematic Universe still feeling relevant after 16 movies.

First, the movie manages to bring Spider-Man “home” to the Marvel Cinematic Universe without making this an Avengers movie in disguise. Tony Stark appears far less than the trailer might have you believe, as Spider-Man sort of plays around the edges in the same way Marvel’s Netflix properties do. Spider-Man’s independence from the world of the Avengers, while simultaneously longing to be part of it, is actually a major plot point, which allows for the movie to have its cake and eat it too. Being able to balance this has become crucial to what makes a Marvel solo film work or not, with films like Iron-Man 2 and Avengers: Age of Ultron leaning too much on sequel set-up, and films like Guardians of the Galaxy and Ant-Man flourishing in their own corners. (Although even Ant-Man loses steam when it sends the hero to the Avengers HQ, which many believe to be the reason director Edgar Wright left the project.) Homecoming gives Marvel the inch it needs and deserves, but not enough to take over the whole project.

Homecoming also succeeds at the superhero game, achieving the second-best Spider-Man film ever in this writer’s opinion. This is accomplished mainly by the performances of Tom Holland and Michael Keaton, who anchor the action and drama by portraying ,a believable and sympathetic hero and villain. We understand both of their motivations along the way and why they are ultimately at odds. The action directing here might be the weakest element of the film, but it still more than competent. The movie is anchored elsewhere, which makes the action/fight  scenes simply icing on the cake. Emotionally, we believe the journey that Peter Parker goes on, even if it’s not the lesson that we’re told that he’s supposed to be learning. We’re led to believe that Peter is learning to not get in over his head, but he continues to do this to the end. Instead, he does learn a lesson about his place in the universe and reliance on himself to overcome obstacles.

Refreshingly, Homecoming’s real “home” is in the high school portions of this movie, which work so well that the audience is left wishing that this weren’t even a superhero movie but just a high-school comedy. Comedy is front and center here, in every scene with his best-friend Ned, the sarcastic and wonderful Zendaya, and all of the teachers, who were smartly filled by casting with comedic actors like Hannibal Burress and Martin Starr. The “high-school comedy” is a genre untapped by the MCU, and makes this entry feel unique and special. It works better in this way than any other Spider-Man film to-date, partly because of the comedy, but also because of the contemporary update on high-school politics. Rather than being a more 80’s or 90’s jocks-versus-nerds dynamic, Peter is at a magnet-school where everyone is a nerd, and the “bully” is just a more self-assured and egotistical version of Peter himself. These little touches make Homecoming feel new, even while classic tropes like disinterested teachers and awkward flirting remain a constant through every high-school experience.

All around, Spider-Man: Homecoming is a momentous accomplishment, and a delight of a movie, that should please everyone, from the committed Marvel devotee, to those who are well past their super-hero threshold, and those who can’t differentiate between an X-Man or a Batman or a Star-Lord.

You might also find these reviews of Spider-Man: Homecoming helpful: 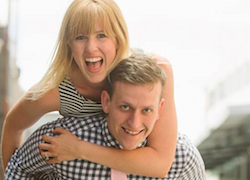