Terrorism is a major issue of concern in our contemporary world. The paper[i] addresses the relationship between Islam and terrorism and also how Christians ought to respond. The analysis rather than being simplistic or binary, is clear-eyed and layered, revealing the complexity of the situation. Neither does it simply condemn Islam wholesale nor does it dismiss the texts within the Qur’an that promote violence and the ensuring practices. Instead it engages in careful and nuanced analysis of the situation. It concludes with suggestions on how Christians can engage Muslims within their sphere of influence in hard conversations regarding terrorism within Islam.

We live in very interesting times where modern technology is easily used or manipulated towards one’s own ends. Many terrorist groups use social media for propaganda, posting online images of horrific acts to promote their ideology. The paper is correct that determining the cause of terrorism and religious practice in general is very complicated on several levels. It is not always easy to clearly identify what forces are at play or are the most influential in the lives of religious people. It thus rightly warns Christians to be wary of facile analysis and conclusions.

This response begins with evaluating the strengths of the paper and also making observations from my context and knowledge of Islam.[ii] It then concludes with some assessments of effective ways to engage in Christian-Muslim friendship. It is necessary to establish the purpose of the conversation or the goal of the examination of Islam. For example, is it academic, polemic, informative or practical? Clarity on the intended audience, influences what is said and how it is said. All of these factors influenced the strategy adopted by the author in writing this paper. Space does not permit a careful examination of all of them.

The primary audience of the paper is Evangelical Christians. The paper does well in assisting Christians to avoid the landmine of unnecessarily offending Muslims, noting that remarks which condemn all of Islam and Mohammed as terrorists, “provides excuses for twisted zealots” and inspires “fear and mistrust among the great majority of Muslims, who are not jihadist.”

One of the principal purposes of the paper is to locate the position of these modern terrorist groups like ISIS, al-Qaeda, Boko Haram within Islam. On the one hand, the paper makes a strong case that these groups are out of step with the majority of the Islamic traditions in how they conduct their jihad. The way these modern-day jihadists engage in their religious wars violates the Islamic jurisprudence guidelines of the four main schools of Islam. On the other hand, it admits that one cannot deny that these groups are Islamic saying, “It is therefore simplistic if not misleading to argue that groups like ISIS and Boko Haram have nothing to do with Islam.” It is complicated!

To illustrate the wide condemnation and denouncement of these terrorist groups, the paper mentions statements by Organization of Islamic Cooperation, prominent Muslim leaders and scholars from the Islamic world. They all note that the jihadis violate the guidelines on how to conduct jihad. The paper classifies their activity as illegal, “part zealot, part thug, part political entrepreneur.” It also cites the notable example of Dr. Fadl, a former leader of the Egyptian terrorist group, Al Jihad, and spiritual brain of al-Qaeda, who recanted his initial bellicose position. He says a Jihad can only be undertaken with the approval of one’s parents and under the right leadership. He also states that, “there is nothing in the Sharia about killing Jews and Nazarenes.”[iii] There are of course several questions about the effectiveness of such condemnation. It is difficult to gauge whether the jihadist will heed his new position or call Dr. Fadl an apostate.

The paper notes that, “The jihadi groups of our time are therefore modern day Kharijites.” Though others have made this association, it is not very convincing for several reasons. All Islamic traditions condemn the Kharijites. They were a radical Muslim splinter group from the seventh century, which held similar beliefs to the modern terrorist groups, as they conducted jihad against fellow Muslims for violating the injunctions of the Qur’an. Though condemned by other Muslim sects, some of their beliefs were appealing to the poor and marginalized. They were a sort of purist Islamic group. They insisted that the Islamic leaders had to be upright and fully obedient to the Qur’an. The Kharijites were also a sort of democratic movement within Islam. They held that the leadership of Islam at all levels was not to be restricted to Mohammed’s family or clan. They said any pious Muslim could become the leader regardless of their background, heritage, or class. Moderate strands of this group exist today in Oman, some regions of North Africa, including Algeria and Libya. It is not difficult to see how this group would provide inspiration to modern day jihadists who also claim to be purists seeking to restore Islam to its origins.

In Nigeria, the terrorist attacks by Boko Haram and Fulani Herdsmen have been met with almost complete deafening silence from the Nigerian Islamic community. The President, who is a Muslim, along with Muslim leaders have not said anything about the recent or past rampant attacks. The only time they have made comments was when Muslims were under attack by Boko Haram and these herdsmen. All of the guidelines for declaring a jihad and engaging in it are not existent in the current Nigerian dialogue. Thus, in Nigeria, the condemnation of such groups is not based on disagreement with their ideology per se but for self-preservation.

In my view, Azumah’s paper jumps too quickly in citing tradition—as is the case in Abu Bakr’s principles for engaging in religious war or limits of conducting a jihad—without mentioning what Mohammed himself did during his lifetime. Many of the jihadists cite the prophet of Islam as the justification for what they are doing. We need to evaluate their actions with regard to whether they are correct in ascribing their actions to the teachings of their prophet.

It is extremely difficult to discern the factors that lead people to join Islamic terrorism. As noted in the paper, “a complex, shifting of sociopolitical, geopolitical, racial, ethnic, cultural, economic, historical, and existential realities inform how religion and indeed life is lived.”[iv] Though Islam contains the seeds violence, they find “fertile grounds” in societies where there is corruption, illiteracy, poverty and mistakes by Western governments. In addition, it is true that modernity, post modernity, and rapid globalization are causing disorientation in the lives of many people in different parts of the world. One needs to query how these disruptions are the root cause of many forms of violence. I believe that one needs to also grant that there are people who believe that embracing violence is the way to bring others to submission to Allah in obedience to the Qur’an; this is especially relevant when this is their stated motivation.

Azumah is correct in asserting that that a person’s citation of a passage of Scripture does not “make one’s views and actions Islamic.” He adds that we cannot “presume a texualist interpretation of Islam, imagining we can explain Islamic terrorism by drawing a straight line between authoritative texts and the actions of jihadists.” It is true that we cannot simply draw a straight-line recklessly. However, from my perspective, some lines can be drawn on several grounds.

First, if a person quotes the Qur’an to justify their position, I am in no position to insert my view that other factors are at play, if they do not verbalize it themselves. This is further affirmed if the interpretation is not just private, but widespread. Azumah says, “My own view is that Islamic texts contain seeds of violence.” If someone chooses to appeal to that text, they are within their rights. Given the widespread nature of terrorism and violence within Islam, it not easy to dismiss it as a misrepresentation of Islam. It is true that the Wahabi and Salafi sects of Islam are prone to using violence as a means of conducting jihad. We must also note that these two sects claim that they are going back to the roots of Islam and uphold the literal interpretation of the Qur’an and the Sunnah. Finally, all of these terrorist groups arrive at the same conclusion independently. It might be that social media plays a role in spreading the ideology. But the question still remains, why is terrorism and violence a common first response rather than a peaceful resolution?

In the conclusion, the paper calls for reform within Islam and a reexamination of doctrines on apostasy, blasphemy, teaching of dehumanization of non-Muslims in general and in Islamic society, promotion of jihad, etc. These are the teachings that jihadists use as the basis of their actions. The challenge that Christians face in talking to their neighbors about these realities is that their friends are not key decision makers in Islam.

One of the main strengths of the paper is the strategy regarding how and why Christians need to engage other Muslims in dialogue. It calls Christians to denounce their racial and religious prejudices against Muslims. It states further that Christians, “must treat Muslims as the mature and intelligent adults that they are and engage them in hard conversations about their religion.” It is true that saying “Islam is the problem” to a Muslim will shut down any conversation. I am not fully convinced that saying “Islam has a problem” is any better. I, however, agree with the suggestion that we should make friends with Muslims and engage them in hard conversations particularly in relation to the different traditions within Islam.

Changing one’s sect or affiliation within Islam is not as easy as it is in Christianity. To change sects entails abandoning all of one’s familial and social ties. While developing friendship is a good starting point, we must very quickly add to this the need to educate ourselves about Islam and Christianity so that we can engage in robust intelligent dialogue. Christians must make more concerted efforts to engage Muslims and befriend them. Building relationship of trust with Muslims around us will give us opportunities to engage in deep conversations about their religion. We need to also seek to understand Islam better.

As an evangelical Christian, I agree that we need to be measured in our statements, but we need to also state the truth about Islam with regard to the way some Muslims practice the religion. However, Scripture enjoins speaking the truth in love. We need to engage Muslims in ways that do not fan the flames of hatred and bigotry. Our task is to know them and share the gospel, not convert them. Our task is to be effective witnesses. Conversion is the work of the Holy Spirit.

Overall, this paper is very thoughtful and indeed helpful in understanding terrorism and violence in Islam and how to engage Muslims in hard conversations. But the first step towards this is building a strong friendship. The stronger the relationship, the more a Christian can engage in hard conversations. The friendship between David Wood and Nabeel Qureshi in Seeking Allah, Finding Jesus, is a good example of this type of friendship. Without such friendship, there can be no mutual understanding and trust and indeed, dialogue.

[i] Throughout this response, “The paper” refers to Dr. Azumah’s paper, “Making Sense of Islam’s Relations to Terror and Violence.”

[ii] I am from West Africa. I have family members who are Muslims and have lived in West Africa where I experienced multiple Islamic terrorist attacks. I also know several people who were killed in these attacks. 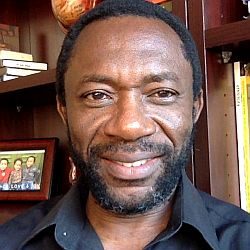 Dr. Bulus Y. Galadima grew up in predominantly Muslim areas in West Africa. Some of his relatives are Muslims. He and his wife Rose Galadima worked in theological education in Africa. He is currently the Dean of the Cook School of Intercultural Studies at Biola University.