In 1841, Solomon Northup, a free African American man living in New York state, was kidnapped and sold into slavery in Louisianna. He remained in slavery for 12 years before finally being miraculously rescued. Upon returning home, he wrote a memoir of his travails and traveled the country speaking of the horrors of slavery.

His memoir has been adapted for the screen, and is releasing nationwide on October 18. The film, 12 Years A Slave, recently won the Toronto International Film Festival and is garnering praise worldwide. We were blessed to be able to screen the film Wednesday, October 9, for an audience of Fuller faculty, students, alumni, and friends. Following the screening, Drs. Barry Taylor, Joy J. Moore, Rob Johnston, and filmmaker and student Avril Speaks particiapted in a post-screening discussion about the film.

That discussion is our podcast this week. It was an emotional screening and discussion. We do hope you will see the film when it releases on October 18. 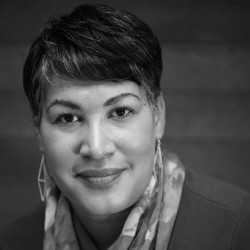 Joy J. Moore serves as assistant professor of preaching at Fuller Pasadena and an ordained elder in The United Methodist Church.