In her article, Pauline Hope Cheong discusses the ever more expanding and changing interrelation of new media technologies and religious authority. By keeping a superb balance between high level theorizing and compelling examples, Cheong points out the multifaceted ways in which current religious leaders and officials interact and utilize technological means.

We can clearly observe that the engagement of figures who have an ascribed religious authority (i.e. leaders, officials or persons with less institutionally recognized yet still widely accepted charismatic authority)[i] with digital technology is (a) intensifying (digital spaces and platforms are increasingly embraced), (b) diversifying (diverse new platforms and technologies are used in diverse ways and forms), both of which (c) may have consequences from consolidating existing authorities to eroding them[ii]. Overall, as Cheong notes, “how religious authority is constructed and recognized is increasingly tied to media factors, including leaders’ perceived accessibility and cultural competence to navigate new communication platforms”.

While I agree with Cheong’s arguments and the theoretical contexts they are based on[iii], let me provide concrete example from a religious tradition beyond the ones traditionally studied, namely that of Hindu gurus’ engagement with digital spaces. Historically perceived and represented as personified Hindu authority, gurus today not only increasingly construct their authority in online environments (often but not exclusively on personal websites) but also use digital spaces (often but not exclusively social media) to interact with their followers (i.e. to offer advice[iv] or rituals)[v]. The word guru literally means “heavy” (with knowledge or authority) and does not necessarily refer to a teacher of a codified religious tradition with authoritative knowledge of scriptures. A guru is often granted religious authority by followers, in the sense of Max Weber’s charismatic authority level, for individual spiritual achievements. In order to reach large audiences and acquire followers, gurus now actively display and create an image or brand of themselves as religious authority figures in digital spaces.[vi]

That is, digital media (including platforms such as websites and social media) are important spaces for gurus to promote themselves and to reach out to existing and potentially interested audiences, including disciples. Not surprisingly, various platforms are used in different ways and may have different audiences. For example, the focus of social media sites tends to be on interactive communication, while websites serve somewhat different purposes, including information regarding the guru’s religious experiences, actions and major achievements. Thus, guru websites have become increasingly popular for constructing and presenting a guru’s claim to be a religious authority figure. As the information is selected, designed and displayed only with the approval of the guru, such websites are means of self-promoting and explicit self-fashioning.[vii]

These self-constructions as figures of religious authority are often embedded in religious codes that are familiar and potentially attractive to the target group. For instance, the Hindu guru Radhe Maa persistently highlights the element of sevā (service, or, more broadly, charity) as well as the widespread belief that Hindu gurus may have a calling imbued since childhood:

“Radhe Maa is a self-declared ‘Hindu spiritual teacher and guru from India’ who has been active especially in the field of sevā (lit. service) ‘to all sentient beings as a means of self-purification for those aspiring for divine grace’ … For example, the landing page … right in the beginning informs: ‘Serve not to change the world but your self’… ‘Service to sentient beings is service to God,” and “Work performed in a spirit of service becomes pure’.[viii]

This emphasis on sevā runs throughout the entire website as Radhe Maa’s charity events and projects are described and visually depicted in photos and videos. The spiritually induced element of sevā is the main authorizing element that constructs Radhe Maa as a guru figure. By depicting her sevā in a rather untraditional way (i.e., not centered on service to a deity but on charity work), she displays herself as a blend of a very modern and a traditional Hindu guru at the same time. Via digital spaces, namely on her website, Radhe Maa succeeds in constructing and portraying herself as a selfless and mankind-serving figure of religious authority, embedded in traditional Hindu values and successfully and effectively transferring them into the twenty-first century. This example demonstrates on the one hand, that the utilization of digital spaces by figures of religious authority today is very common in basically all religious traditions, and on the other hand, that the use of digital spaces leads not only to a new quantity but also to a new quality of negotiations around religious authority. 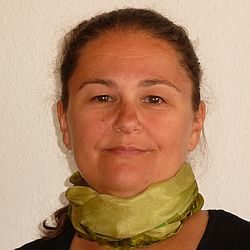 Xenia Zeiler is Associate Professor of South Asian Studies at the University of Helsinki, Finland. Her research and teaching are situated at the intersection of digital media, culture and society, specifically as related to India and the global Indian community. Her research foci are video games and gaming in India, digital religion (especially Hinduism), global Hinduism, and Tantric traditions. She also researches and teaches aspects of (Global) Digital Humanities and popular culture, especially as related to India.