I was called to ministry, but afraid to preach. Afraid I might say something heretical or at the very least heterodox. So I sweated every word: would they pass muster with Calvin? Would they earn Jesus’s stamp of approval? If I offended heaven, would God revoke my union card?

The year was 1964. I was thirty years of age, with a BA in Biblical Studies from Azusa Pacific, a BD from Fuller, and a ThM from Princeton. I was called to ministry, theologically trained, and now installed in my first church, but afraid to preach. Nevertheless, twice on Sundays at First Covenant Church of Los Angeles the congregation shelved their hymnals, opened their Bibles, and looked expectantly to the pulpit. And, twice on Sundays, I read the text and preached. Lightning did not strike. No one challenged my orthodoxy. The congregation left to take up their Monday tasks after murmuring their appreciation at the door. A few testified to a fortified faith. Some spoke of taking a new direction in life.

Feeling emboldened, I began to speak about God’s mission to the lost: would we share our pews with strangers from the neighborhood? Now, when they met me at the door they said, “Yes, and how do we do it?” A few weeks later over a hundred members canvassed the neighborhood with invitations to join us in worship. And when we discovered that the great majority of our neighbors spoke only Spanish, they met me at the door and said, “We have no right to support missionaries in Latin America if we’re unwilling to be missionaries to the Latins at our doorstep.”

But how? I did not speak Spanish, nor did any of the other staff members. The church’s budget was already strapped for funds. I might preach missional sermons, but when push came to shove, who would do it? And how would we pay for it?

It turned out that the God of mission was out ahead of us, as usual. If I would preach and the congregation would concur, God would provide. Eldon and Opal Johnson had just returned from twenty-five years of missionary service in the highlands of Bolivia. Eldon needed open heart surgery. His surgeon told him he could not return to Bolivia; the extreme elevation would place too heavy a burden on his heart. “So what am I going to do for the rest of my life?” he asked. I replied that I thought I knew the answer. When Eldon was fully recovered, the church asked the Johnsons to spend three months exploring our neighborhood, assessing the need for outreach. They reported that the area was teeming with recent immigrants from South and Central America. Most were living hand-to-mouth, in tiny apartments, sharing with two or three other families in similar straits. Most had a nominal faith while a few came from Evangelical churches. In fact, they met three friends from Bolivia who offered to assist in any missional venture the church might tackle. But again, how would we finance it?

We called a congregational meeting to share the opportunity and to seek support. After several members had spoken, the chair of the finance committee rose and said, “Friends, when our parents and grandparents came from Sweden to the United States, the New England Congregationalists gave them space to worship and even paid the salaries of the pastors until the congregations could become self-supporting. Now, in the providence of God, it’s our turn to do the same for our Spanish-speaking neighbors.” That’s all it took; the vote to proceed was unanimous. We would hire the Johnsons to lead us in mission and trust God to provide the means.

Soon our English-speaking members were collecting furniture for our Latin neighbors. We bought a van to transport new arrivals to clinics, employment offices, and the immigration bureau. On Sunday mornings we drove out of our way to pick up families for Sunday school and worship. When we ran across fathers that were in the U.S. alone, hoping to save enough money over time to bring their families north, we provided interest-free loans so they could be reunited right away. We sponsored ESL classes for our neighbors and Spanish lessons for our English-speaking congregants.

Within a few years several hundred Spanish-speaking believers were sharing our facilities. Once a month we came together to celebrate our unity in Christ at the Lord’s Table, looking to the time when “persons will come from east and west, and from north and south, and sit at table in the Kingdom of God.” John Calvin (1509–64) was a French theologian and pastor during the Protestant Reformation and the principal architect of a system of Christian theology later called Calvinism. The Reformed and Presbyterian movements look to him as a chief expositor of their beliefs, with emphasis on his Institutes of the Christian Religion (1536).

In the Institutes Calvin introduces two themes for understanding what he sees as the indelibly spiritual character of human existence, even in its fallen condition: the sense of divinity (sensus divinitatis) and the seed of religion (semen religionis). All human beings, Calvin says, have a sense of the divine, whether they consciously acknowledge it or not. This is due to the fact that God has planted the seed of religion in every human heart. Human beings, even sinful human beings, yearn for God. As St. Augustine put it in the form of a prayer at the beginning of his Confessions: “Thou hast made us for thyself and our hearts are restless until they find rest in Thee.”

To be sure the yearnings of the sinful human heart are fundamentally misdirected. As Calvin also put it: “The human heart is a factory of idols. . . . Everyone of us is, from his mother’s womb, expert in inventing idols.” When, because of our sinful rebellion, we cut ourselves off from a vital relationship with our Creator, we seek to satisfy our hopes and calm our fears by putting our ultimate trust in something creaturely, in something that is less than the true God. But it is precisely because we are created for fellowship with the Living God that our idols never really satisfy our deepest yearnings. . . .

We need to see our congregations as places of safety, as spaces into which we can invite wandering sinners to come home to the Living God. And those of us who care deeply about confessional identities need to be willing to learn important lessons from those newer congregations about how best to welcome this new generation of seekers. We need to think new thoughts, in the new cultural situations in which we find ourselves, about the tone and atmosphere of our worshiping life—and about the language that best communicates the truths of God’s Word to people who desperately need to hear the Good News of a Savior. . . .

What happened? Apparently God was less concerned with theological perfection than with missional passion. The truth is, my sermons were long and disjointed. Trying to be persuasive, I used too many shoulds and oughts. Yet God graciously stooped to use my pedestrian preaching to move a congregation into mission among its neighbors. Calvin would not have been surprised:

God uses the ministry of men [sic] whom he employs as his delegates, not to transfer his right and honour to them, but only that he may himself do his work by their lips; just as an artificer makes use of an instrument in the performance of his work. If he were himself to speak from heaven, there would be no wonder if his sacred oracles were instantly received with reverence, by the ears and hearts of all mankind. But when a contemptible mortal, who had just emerged from the dust, addresses us in the name of God, we give the best evidence of our piety and reverence towards God himself, if we readily submit to be instructed by his minister, who possesses no personal superiority to ourselves. For this reason . . . he has deposited the treasure of his heavenly wisdom in frail and earthen vessels.

—Institutes of the Christian Religion, Vol 2, 316

Earthen vessels: that’s no excuse for sloppy preparation and slipshod preaching. If “the Word became flesh and dwelt among us . . . full of grace and truth,” then our words, if they are to convey grace and truth, will be carefully selected and thoughtfully arranged. We will work at our exegesis, employ appropriate illustrations, and speak to the heart as well as to the ear. But when all is said and done, we will rely on the Holy Spirit to do God’s work through what the Apostle called “the foolishness of preaching.”

I am no longer afraid to preach. Conscious of my limitations, concerned to exegete thoroughly, cautious lest I make unrealistic claims—but not afraid. If I have gained any wisdom for preaching, it is that the end product of my preaching is God’s business. I am quite willing to leave it in God’s hands. 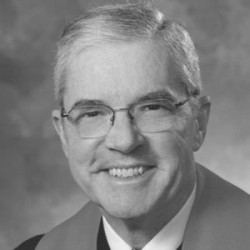 Thomas Albert Erickson, PhD, is a 1960 graduate of Fuller. He earned a ThM from Princeton Seminary and a DMin from San Francisco Seminary. He retired in 2002 after a 16-year ministry at Valley Presbyterian Church, Paradise Valley, AZ. Since retirement he has served as an interim pastor in Washington, DC, Springfield, MO, and Mission Viejo, CA.