Ed Willmington, director of the Fred Bock Institute of Music at Fuller, invited me to audit his Music as Theological Expression class one early morning, casually mentioning that one of his students had just given a report on the music of Bill and Gloria Gaither. At the conclusion of the class I introduced myself to that student, Lilian Ateh, saying I was sorry I missed her presentation, as the Gaithers are close friends of mine. I would love to have heard her impressions. Elated at the news, she asked if she could hug me. She was not the only one who was surprised.

Lilian is from Cameroon, West Africa, and I was pleased—and amazed—that she knew so much about the music of my friends who live in a tiny town in Indiana. She assured me that her friends and church members back home “all sing their music. We love songs like ‘He Touched Me’ and ‘Because He Lives.’”

I couldn’t wait to call Gloria and tell her about this vibrant, joyful student from halfway around the world who had been shaped by her music. Within a few days, a box of CDs and music books arrived at my home along with a message for Lilian. I made arrangements to take her to dinner and give her their gifts.

As we walked into the restaurant, my appetite was not as much for food as it was to learn about this new friend. As soon as we ordered, my questions began: “Tell me about you, your family, your church, your background, and your reason for being at Fuller Seminary.” It quickly became clear that Lilian, a young woman with a big vision, has a passion for serving Jesus Christ.

Her paternal grandfather had seven wives, 30 children, and countless grandchildren. Her father became a Christian as a young man, married “only” one woman, and became a Baptist minister in their hometown of Bamenda—also home to over nine million others. Lilian is the eldest of six girls and one brother.

After graduating from college, she joined the staff of her father’s church and, on the side, began an early morning radio broadcast called Showers of Blessing. It was with the broadcasting venture, however, that she found her true calling: “I was so passionate about it that I volunteered for three years,” she says. “I felt that it was an assignment given to me by Jesus Christ.” The daily one-hour program soon mushroomed into six hours of airtime. Listeners called in to ask questions, to request prayers, and to talk with her between the music sets she hosted. Nearly 25 percent of the citizens of Bamenda listened to Lilian each morning as she spoke about Jesus Christ.

One morning, Lilian had the idea to invite listeners to join her at a local hall so she could meet and pray with them. The response was so great that they were forced to rent a larger venue—a gathering that blossomed into a church, and then another church. Ministers were hired to meet the spiritual needs of these worshippers, to “bring people into God’s marvelous light.”

Before long Lilian realized that she needed further training to minister to the men and women of her city. She asked her mother and father to pray that God would show her where to go, and one night she had a dream that four angels took her to an unknown location called “Beverly Hills.” She thought the city was not a real place, but wondered, “maybe God is directing me to California.” She searched “seminaries in California” on the Internet and Fuller Theological Seminary appeared on her screen. Instantly on reading about it, she felt that she had her answer. Her parents agreed and, unknown to her, her father promptly sold his property to make it possible for her to travel to and study on the other side of the world.

When Lilian graduates from Fuller, she will return to West Africa with a new understanding of how to interpret Scripture, a clearer view of missiology, and fresh ways of seeing worship music through the lens of theology. She will also take a burning desire to fulfill God’s assignment for her, which is to establish a radio and television ministry. “After Fuller, I will be able to bring certain changes in the minds and lives of the people of my community and Africa as a whole,” she told me. “People may not attend church, but they will tune to radio or television.”

Lilian is a bright light in God’s kingdom and in the lives of all who know her, and I am grateful that she has become part of our Fuller family. She will be a powerful witness to all who hear her voice and are embraced by her love. (By the way, she has yet to visit Beverly Hills!) 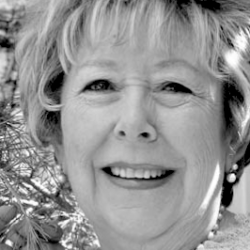 Lois is the cofounder of the Fred Bock Institute of Music at Fuller and chair of the board at Fred Bock Music Publishing Companies.