Let me preface my meditation with an issue of translation. In the NRSV translation, verse 9 of First John 1 reads as follows: “If we confess our sins, [God] is faithful and just, and will forgive our sins and cleanse us from all unrighteousness.” This translation invites the thought that what characterizes God, namely, fidelity and justice, is something different from what God cleanses us from, namely, unrighteousness. But the Greek word translated as “just” is dikaios, and the Greek word translated as “unrighteousness” is adikias. The preface “a” in Greek means the same as the preface “non” in English; in fact, we sometimes substitute the Greek “a” for the English “non”—as in “atemporal.” What God cleanses us from is the lack or negation of that very thing which characterizes God. The English translation obscures this identity from us—the identity of that which characterizes God with that whose negation God cleanses us from.

“God is light,” says John. In God “there is no darkness at all.” No shadows, no dark places. Light everywhere.

A friend of mine, Lee Wandel, teaches Reformation history at the University of Wisconsin. Wandel notes that John Calvin, in a few passages, argues that the best symbol we have for God is light, and the best metaphor, the word “light.” Calvin’s argument for this position is that light is uncircumscribable. Light has no boundaries that one could draw around, scribe around, circumscribe.

Having noted this claim on Calvin’s part about symbolism for the divine, Wandel goes on to argue that Calvin’s thought on this matter had a profound influence on Calvinist church architecture. Most of the early Calvinist churches in central Europe were taken over from the Catholics; it’s the later churches which the Calvinists themselves built that she has her eye on. The West Church—Westerkerk—in Amsterdam, for example, and the early Congregational churches in New England.

A person familiar with Catholic church buildings will, without even thinking about it, interpret these Calvinist churches as empty—stripped of statuary, of carvings, of paintings, the whole lot. It’s all been tossed into a dumpster. The church is bare. Some Calvinist church historians argue, defensively, that this is an exaggeration. Some carvings do remain, on the pulpit, for example; and there is some decorative painting on panels displaying the Ten Commandments.

True enough, says Wandel; but this misses the point in almost ludicrous fashion. These buildings are not empty but full, chock full, full of something else, of course, than statuary, carvings, and paintings. Full of light, as chock full of light as a building could be before the days of steel framing.

The Fullness of Westerkerk

The Protestant Westerkerk (meaning “West Church”) in Amsterdam was built between 1620 and 1631, according to the design by Hendrick de Keyser, and boasts the highest church tower in Amsterdam at 279 feet. Artist Rembrandt von Rijn is buried in the church in an unknown location. The Westerkerk is often mentioned in the Diary of Anne Frank, as its clock tower could be seen from the attic of the house where she and her family hid from Nazi persecution. Frank described the chiming of the clock as a source of comfort.

Some fifteen years ago I served on the building committee of my congregation back in Grand Rapids, Michigan. I was on the subcommittee charged with composing the program for the architect—guidelines for him to follow in the design process. As preparation for our work, our subcommittee visited a number of churches that had recently been built to see what ideas we could glean. In almost every case these new churches were dark inside, the darkness usually alleviated with a shaft of light from a light-scoop. To enter them was to enter darkness.

At the time I had not yet met Lee Wandel and had not thought about the significance of the fact that the historic Calvinist churches are chock full of light. Nonetheless, I and my fellow committee members felt in our bones that darkness was all wrong. We told our architect that he had to design a building that gave one the sense of coming into the light upon entering. He succeeded admirably.

If one asks what it is about God that Calvin thought light was the most adequate symbol for, the answer is, surely, God’s infinity; the uncircumscribability of light makes it the best symbol available to us for God as infinite. But when John in his First Letter says that God is light, it is not God as infinite he has in mind but God as love. Out of love God has given us a commandment that illumines our way. And that commandment itself speaks of love. We are to love one another. The one who “loves his brother abides in the light, and in it there is no cause for stumbling,” says John. The one who does not love but “hates his brother is in the darkness and walks in the darkness, and does not know where he is going, because the darkness has blinded his eyes.”

I’m sure you are all aware of the fact that this theme, of God as shining a light on our path, and of that light as radiating out from Christ, runs deep in Christian scripture. Matthew quotes Isaiah (9:2) to describe the significance of the coming of Christ into the world:

The people who sat in darkness have seen a great light,
and for those who sat in the region and shadow of death
light has dawned. (4:16)

And in Luke’s gospel, Zechariah, speaking of the young Jesus, declares that

the day shall dawn upon us from on high
to give light to those who sit in darkness and in the
shadow of death,
to guide our feet into the way of peace. (1:78–79)

But in his First Letter, John is saying something more and something deeper than that the love-command is a light on our path, so that we do not have to stumble and fumble around in the dark, wondering how to live and what to do. John introduces that “something more and something deeper” in chapter 4 by declaring that “God is love.” Earlier he said that God is light; now he says that God is love. Not only is the commandment to love a light on our path that God out of love gives us; God as love is himself light. God is the light of love.

What’s the connection? With his eye on God as love, why would John describe God as light? What do love and light have to do with each other? I daresay that everybody here would say that light goes with love and darkness with hatred. Love, we agree, is bright; hatred is dark. But why? Is it possible to discern why we all think that hatred is dark whereas love is bright and light?

Having declared that God is love, John goes on in chapter 4 to say that

In this the love of God was made manifest among us, that God sent his own Son into the world, so that we might live through him. In this is love, not that we loved God but that he loved us. . . . Beloved, if God so loved us, we also ought to love one another. . . . If we love one another, God abides in us and his love is perfected in us.

I think we can now begin to spy why God as love is light. To love my brothers and sisters is to seek their good, their flourishing. God’s love for us radiates out into our seeking the flourishing of each other. Is that not analogous to what is most fundamental about light in our lives? Yes, light illuminates our path. But even more fundamental, light radiates out from the sun to nourish us, to provide the energy without which there could be no life. How better to describe God as love—love radiating out from God onto and into us and from us to the neighbor—than to say that God is light?

You don’t need me to tell you that this has been the chapel talk of a professor, not a preacher! I’ve been asking in professorial fashion what John was saying and why he might have said it. But I do not want these hermeneutical reflections about what John said to be the last word. These reflections were aimed not at replacing what John said, nor at standing in between you and what John said, but at casting light on what he said. John’s own gentle injunction must be the last word: Beloved, let us love one another; for love is of God, and those who love are born of God and know God. Those who do not love do not know God; for God is love.

And God is light. God’s love is the light that shines onto and into us and through us to the neighbor, sustaining us and making us flourish as does the sun.

This essay was first delivered as a guest chapel lecture on the Pasadena campus of Fuller Seminary—part of the inaugural Brehm Lectures on the intersection of worship, theology, and the arts.

This article was published in Theology, News & Notes, Spring 2010, “Human Flourishing: Reflecting the Abundance of Creation.” 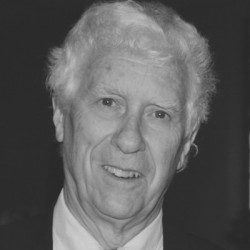 Nicholas Wolterstorff is the Noah Porter Professor of Philosophical Theology Emeritus, at Yale University. He spent 30 years teaching at Calvin College in Grand Rapids. In 1993, he gave the Wilde Lectures at Oxford University (published as Divine Discourse), and in 1995 he gave the Gifford Lectures at St Andrews University (published as Thomas Reid and the Story of Epistemology). He teaches philosophy of religion and aesthetics, and seminars in epistemology, hermeneutics, and philosophy of religion, and is a widely published author.