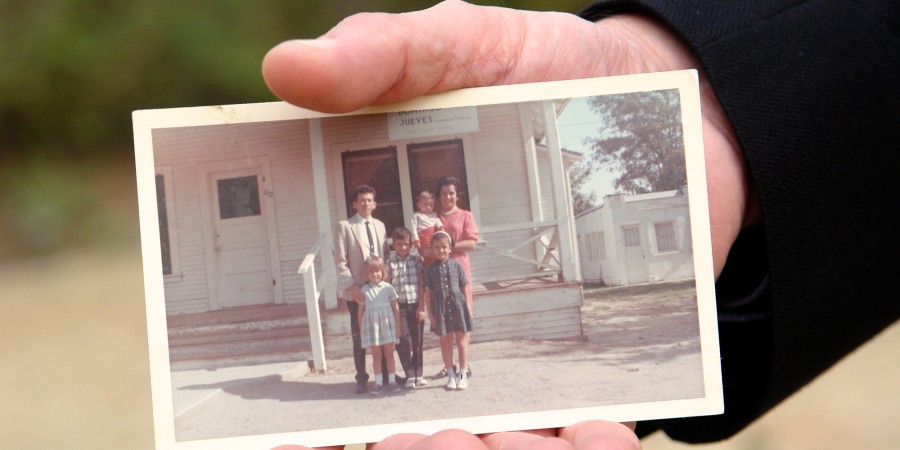 “What I find most inspiring is to read the Bible through the eyes of immigration. Abraham and Sarah, our patriarch and matriarch of faith, are people who had faith in God in the process of moving though they did not know their destination. Throughout the Scripture we see that God is at work when people are on the move. The people of Israel actually learned more about God when they were in exile than when they were in the land of Israel. I challenge my students to read the Bible through the lens of migration. In the New Testament, we, as followers of Jesus Christ, are often called strangers, pilgrims, people on the move. As we read through the Bible we see that God often works through those who are immigrants. All of those things point to the fact that we should be concerned about this issue.” 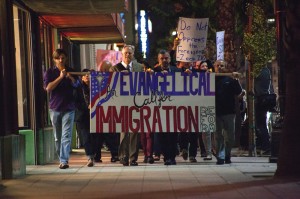 Rally to advocate for IMMIGRATION REFORM

In the winter of 2013, President Mark Labberton looked out over a crowd gathered at Pasadena City Hall and told them, “We often think of ourselves as a nation of immigrants, but when it comes to immigration reform our hearts just shut down. We need to make our hearts bigger than they are.” He was speaking to over 300 advocates—all Fuller students, faculty, and community supporters committed to comprehensive immigration reform. It was the final stop on a march that started in prayer on Fuller’s Pasadena campus and ended with testimonies and songs on the steps of City Hall. The Peace and Justice Advocates student group worked with LA Voice and G92 to organize the rally, and they sent a clear message to the local government to not only push immigration reform on a national level but also to remember their commitments to undocumented people living nearby. Read more here.

“The Bible is filled with immigrants—all people created equal in the image of God. We see immigration reform as an important issue, as a matter of gospel. We can continue to be a light-bearing country, a country that stands out for how we treat others.”

—from a Phoenix, Arizona, gathering of church and education leaders to pray publicly for immigration issues

“We tend to think that the psychological is separate from the physical and separate from the spiritual, but I believe that they’re all intertwined. When we think of trauma, we see precisely this connection. When an unexpected traumatic event [like the deportation of a parent] occurs, it shatters your concept of the world. It shatters your faith in God, your relationship with others, and your sense of purpose and meaning in life. Particularly, citizen children who are here legally feel that they are not protected by the society or their parents or even God, and their sense of security and hope is challenged. . . . In the work that I do, I see resilience in children, in the Latino community, in agencies who are trying to come alongside immigrants and families that are in need of support; I see communities who are providing support in very creative ways for these families. I think the important thing is to be educated, to be willing to be open, even at times to be bold.”

—from a presentation, with doctoral student Marisol de Jesús-Pérez, at a conference of the Latino Behavioral Health Institute. See more

A prayer from TOMMY GIVENS, given at a Pasadena immigration rally in 2013

Our father Abraham was a wandering Aramean. Like him we are an immigrant people in search of an earth of justice and peace. God, in our wandering we confess that we have turned from the path of life that you have put before us and gone our own way; we have turned from you and from our neighbors. We have settled in ways that keep us from welcoming new immigrants to our communities. We have made a system of laws and documents that oppresses them. We have driven them to take extraordinary risks to survive and seek a healthy life: crossing deserts, working for pitiful wages, living in fear. Turn us now toward these who suffer and toward you, so that we will be hospitable even when the law of the land is inhospitable, and so that laws may be reformed to provide a just welcome. May the gathering of our bodies and words tonight change our hearts. May our body and voice reach to churches throughout this land and to those in positions of power. Grant us forgiveness, we pray. Grant our immigrant neighbors justice, we pray. Amen.

GLEN STASSEN, the late Smedes Professor of Christian Ethics, from his groundbreaking book on ethics

“The perception of all human beings as equal, and equally valuable, as persons worthy of respect and equal treatment before the law, is a relatively rare and recent achievement in human history. The concept that women, children, racial minorities, immigrants, refugees and the poor are to be treated not only equally but with special concern because of their frequent marginalization and vulnerability is a central biblical teaching rarely actualized in public life.”

An invitation to the WHITE HOUSE

It was past 10:00 on Sunday night when Solano Beach Presbyterian Church pastor Mike McClenahan [DMin ’00] was surprised to see an email from the White House. It invited him to meet with President Barack Obama and his senior staff to discuss the moral urgency of passing immigration reform. He thought it was a joke. A quick email to friends at the Evangelical Immigration Table confirmed it was real, and the next morning he was speaking to the President of the United States. McClenahan was joined at the meeting by Fuller alumna Hyepin Im (pictured in red). The White House thanked attendees “on behalf of all of us, for your interest and leadership on this issue.” Read more here.

“You shall not wrong a sojourner or oppress him, for you were sojourners in the land of Egypt. You shall not mistreat any widow or fatherless child.”

“[When I was] an undocumented immigrant, I struggled to reconcile guilt and gratitude. Guilt because I understand that by crossing the Mexico-US border without inspection, I broke the law. Gratitude because I validate my mother’s decision to provide a better life for her family. When my grandfather died in 1997, my mother saved money and paid a smuggler (we call them coyotes) to help. And we embarked on a one-month journey across Mexico to Los Angeles, California.

“Years later, I’m getting a master’s degree in theology, and I’m passionate about humanizing the issue of immigration. People everywhere are moving away from their native countries to seek out better futures, jobs, a safer environment, sacrificing their family ties, abandoning their children, communities. Most of the time they move by force, and others move by choice. Christians should pay close attention to this movement of people. Christians should test the times and the seasons to see and hear what it is the Lord is trying to tell us through his undocumented children everywhere. My challenge, therefore, to you tonight is to have eyes to see, and ears to hear the cries of the undocumented immigrants here in North America but also in the rest of the world.” —Jennifer Hernandez [MAT student], at the Pasadena rally for immigration reform