When Ava Duvernay entered the filmmaking scene in 2011 with her film, I Will Follow, she broke new ground not only for the African-American community, but for the independent film community at large. As an African-American female film director, she accomplished something we rarely see in movies: a humanized view of African-American life that was not insular or exclusive, using death of a loved one as a motif or a method to discuss the grieving process. As an independent filmmaker, she proved that people do want to see stories about real people and real lives, and that sometimes it takes unconventional means to bring these unique stories to the forefront.

I Will Follow is the story of a woman, Maye, trying to get through the grief of losing her beloved aunt to breast cancer. Maye has a day of reckoning with her grief as she cleans her aunt’s belongings out of the Topanga Canyon home they have shared. During this cleansing process she is visited by twelve different guests – family, friends and neighbors, who all in some way remind her about what it means to live life to the fullest.

One of the richest relationships during the course of the film is the one between Maye and her Aunt Amanda. Through various flashbacks, we learn that Maye, a successful make-up artist, and Amanda, once a studio session musician, were very close. Amanda’s relationship with her own daughter, Fran, was estranged. She had no one to help her during her sickness, so Maye’s companionship only drew them closer. As a result, Maye and Amanda make a decision to forsake all in order to celebrate the last days of Amanda’s life.

Tensions arise when Fran arrives to help clean up the rest of the house. Sentimental items reveal Maye’s difficulty in letting go, and each item also reveals the tension brewing between Maye and Fran. In the poignant, raw performances of Salli Richardson and Michole White, Maye and Fran (respectively) reveal all the regrets that people often have when someone dies — regrets of not doing enough, of not spending enough time with loved ones, or of simply not being ready to say goodbye.

The cultural significance of I Will Follow is also not to be ignored. Ava Duvernay directed this film on a shoe-string budget of $50,000 from her own bank account. The success of this film allowed Duvernay to make her second feature film, Middle of Nowhere, which won her the Best Director Award at Sundance Film Festival in 2012. The film also allowed her to launch the African American Film Releasing Movement (AFFRM), a marketing and distribution company that specializes in quality films by black directors. Through AFFRM, I Will Follow has paved the way for several other African American filmmakers such as Andrew Donsunmu (Restless City), Alrick Brown (Kinyarwanda), and Neil Drumming (Big Words) to name a few.

Interestingly, Duvernay did not set out to make a black film. She says, “I purposely made sure there was no reference to race in the film. I wanted the actions and the beauty of the family itself to say everything that needed to be said about how black people live which is just like everybody else.” However, the film is very subtle and brilliant in its embrace of some nuances of black life.

African American cinema emerges out of an all-too-common legacy of stereotypes dating from the caricatures of Aunt Jemima in the minstrel shows all the way through Tyler Perry’s Madea movies today. As bell hooks states in her article, “The Oppositional Gaze: Black Female Spectators”: “When most black people in the United States first had the opportunity to look at film and television, they did so fully aware that the mass media was a system of knowledge and power reproducing and maintaining white supremacy. To stare at the television, or mainstream movies, to engage its images was to engage its negation of black representation.”

I Will Follow is a very simple film, but it is a film that is worthy of discussion in light of theology and relationships. Death is an inevitable part of life that we all must face at some point, but it is often complicated to try and navigate and salvage the relationships that are left behind. In addition to its theological implications, it also opens up a conversation about death and loss within a cultural context that is usually not seen in movies.

In the African American community, as well as in other communities, the aftermath of death is often not talked about or shared openly, and this film provides a means to process those emotions as well as to heal broken relationships. Yet, what I Will Follow so nicely proves, is that even though something like grief can play itself out differently in different contexts, ultimately it is the same pain that is felt beyond culture, whether it is openly expressed or not. 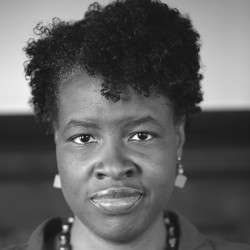