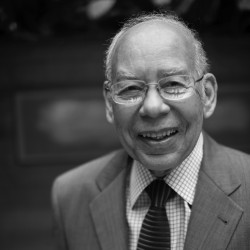 William E. Pannell is professor emeritus of preaching, having joined the Fuller faculty in 1974, taught for 40 years, and received emeritus status in 2014. The seminary recognized his tremendous service to Fuller and the whole church with the January 2015 renaming and dedication of the William E. Pannell Center for African American Church Studies. His books include My Friend, the Enemy (Word, 1968), Evangelism from the Bottom Up (Zondervan, 1992), and The Coming Race Wars? A Cry for Reconciliation (Zondervan, 1993).

Learn more about Dr. Pannell on his faculty profile.

Study with the Pannell Center for African American Church Studies.

“I don’t care where you’re from, but don’t come here and think you’re going to get away with narrow-mindedness in an institution such as ours. It just cannot be tolerated. We’ve got to work on that. After all the smoke clears, African Americans are still being left behind in major evangelical institutions. So we just cannot go to sleep here at Fuller.”

This Is Then, That Was Now

Expecting to Know the Mind of God through Preaching the Bible

An Afternoon With Bill Pannell

Working Together Toward Racial Reconciliation