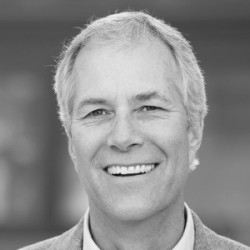 C. Douglas McConnell assumed the role of provost and senior vice president of Fuller in 2011. He joined Fuller in 1999 as associate professor of leadership and intercultural studies and was named dean of the School of Intercultural Studies in 2003, a position he held until his appointment as provost. McConnell established a program that focuses on mission to children at risk, which includes equipping leaders and providing research on missional responses to the plight of children globally.

McConnell and his wife, Janna, spent 15 years as missionaries in Australia and Papua New Guinea with Asia Pacific Christian Mission (APCM, now Pioneers). From 1992 to 1998, he was an associate professor and chair of the Department of Missions/Intercultural Studies and Evangelism at Wheaton College. Prior to coming to Fuller, McConnell served as the first international director of Pioneers, from 1998 to 2003. In addition to his leadership and teaching responsibilities at Fuller, he continues to be actively involved as a mission advisor and workshop leader worldwide.

As dean of Fuller’s School of Intercultural Studies, McConnell established a new program focusing on mission to children at risk, which engages in research on missional responses to the plight of children globally and equips leaders in this growing field. He spearheaded the redesign of the Doctor of Missiology degree, developing a format that allows leaders to earn the degree in context while continuing their ministries. Also under McConnell’s leadership the new Center for Missiological Research was formed, which addresses challenges facing the global church by promoting collaborative research among Western and non-Western scholars on emerging missiological issues.

Reflections on a Global Seminary