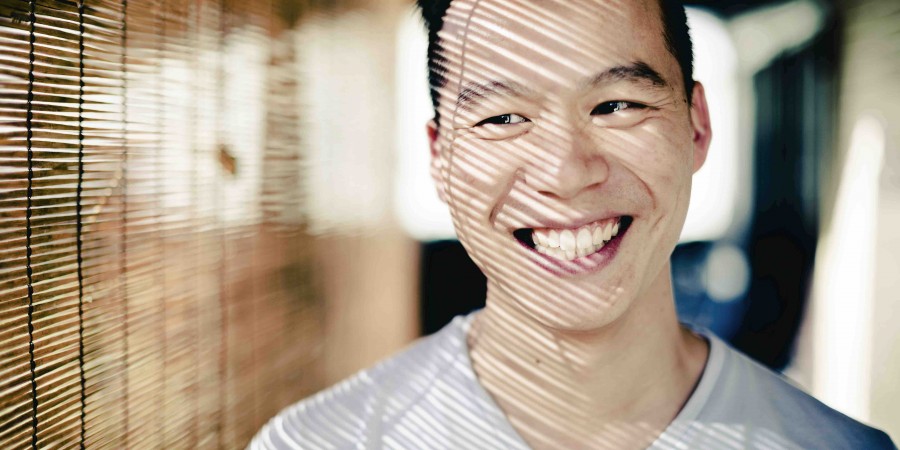 There were a lot of questions on my mind as I sat down to sip cold brew and talk with Daniel Chou [MDiv ’15], editor-in-chief of Inheritance, on the porch of the magazine’s offices. Inheritance tells stories about the ways Christian faith interacts with Asian and American cultures, and Daniel’s team examines the implications of being people of a particular place: how our respective cultures, heritages, and experiences affect how we understand God and practice our faith.

With a simple story Daniel offered an entry point into a topic that can easily veer into overly intellectual territory. Asian American cultures, he tells me, have a propensity to cultivate a culture of debt, which can then lead to a transactional understanding of grace.

“If we were doing this interview in a coffee shop or over a meal and you were also Asian, we might fight over the bill because it’s very hospitable and generous to be the one to pay,” Daniel said. “But what that actually creates is a culture of debt: If I win out and pay the bill, you will feel compelled to pay me back. To view generosity and hospitality as transactional is common in Asian cultures.”

This cultural stance can have broader implications, he went on to say. “It’s problematic when we look at grace through that kind of a lens—because we can never repay Jesus for his sacrifice on the cross, and it makes the sacrifice of Jesus unwarranted and even unwanted. It becomes dangerous and misguided when there’s a focus on repaying Jesus for what he did for us.”

Yet there can be a positive side to this tendency toward reciprocity, Daniel believes: Asian American cultures are also convicted to love God back tangibly and abundantly out of love.

“Just receiving grace is not the end of the story,” Daniel said. “Grace leads to more grace—it leads to passing grace on to others and reflecting more love for God. Cutting out the transactional view but keeping the commitment to reciprocation based on grace is important. When this happens in the Asian American community, it’s a great model for the evangelical community.”

This is just one example, Daniel says, of how our contextuality—being embedded in a particular culture that shapes how we understand the world—brings both blessing and burden. In his work at Inheritance magazine he looks closely at this dynamic, examining how contextualized theology matters in the everyday.

If there’s one thing seminary has taught me, I thought as we talked, it’s that humans are necessarily people of a particular place and, therefore, particular perceptions. We cannot escape our contexts. When those contexts give us unique ways of understanding the Christian faith and the world, they bring a rich diversity to our communal life—diversity that’s worth acknowledging and examining in all its intricacy.

What does that diversity look like in the everyday? I wondered. How do our cultural backgrounds affect our understanding of faith both positively and negatively?

When I asked Daniel why he is so concerned with diversity and contextualization, he drew on his understanding of the eschaton described by John in Revelation—an image in which multitudes of nations will worship God. It will not be a raceless group, Daniel pointed out, but a diverse set of distinctive bodies. Inheritance magazine tries to tease out how that future reality shapes the present, addressing questions similar to those that were on my mind: how does that vision of so many different people worshipping together affect how we understand ourselves and interact with each other today? How does praying “let your kingdom come, on earth as it is in heaven” affect today and how we understand ourselves?

Despite that vision in Scripture, Daniel tells me his first task is always convincing others that cultural diversity is important. While many churches acknowledge diversity, his view is that most “multicultural” churches are, in fact, monocultural. “Even though everyone looks different, they end up emphasizing white evangelicalism,” he claims. “They’re preaching a gospel that says diversity doesn’t matter.”

Yet true multiculturalism, Daniel is quick to point out, even transcends ethnicity.

“I’ve encouraged pastors at immigrant churches to think about themselves as multicultural,” he said. “They’ve asked me, ‘What do you mean? We’re all Korean’—or Taiwanese, or Chinese, or whatever their ethnicity happens to be. But, I’ve said to them, the fact that some of you were born there, some of you immigrated here at a young age, some of you were born here, some of you had kids: that’s four different cultures. And that’s not factoring in some being from the East Coast and some from the West Coast. Even if you have one common ethnicity, you’re multicultural! And you need to think about how to celebrate that.”

While Daniel was first introduced to diversity in Christian circles growing up in a Taiwanese congregation in Maryland, Fuller was pivotal in shaping his posture toward diversity. Daniel approached seminary with no intention of pastoral ministry. He was exploring options—even thinking about bumming on the beach until he ran out of money—when six different people, from different circles in his life, asked him what he thought about going to seminary. That drumbeat of input from others led Daniel to consider whether, for him, seminary was what Hugh De Pree Professor of Leadership Development Scott Cormode later described as “the next faithful step”—simply doing what you think God is telling you to do next. He decided it was.

Fuller provided a space for self-examination and learning—a place where he could take his learning and interpret it in light of his own experience as an Asian American for his generation.

“Whenever I took classes,” he said, “mentors like Daniel Lee and Ken Fong encouraged me to ask, ‘How does my Asian Americanness affect this? How does this apply to how we care for Asian Americans? How does a theology of communion, for example, fit in with Asian American communities?’ In seminary, we’re not necessarily told what to believe or what to take in, but we’re exposed to these ideas in a way that causes us to deeply reflect on ourselves.”

Seminary, he tells me, is less about absorbing information and more about getting tools with which to perceive and engage a changing world. It’s about being able to posture ourselves in distinct ways—and one of those ways is seeing the beauty in the diverse vision of Revelation as it breaks into the present.

“I’ve learned to recognize our differences, and that somehow unearths a more beautiful understanding of God than if we only had one perspective or viewpoint,” he said. “That’s a beautiful posture.”

Now he shares that posture with others, disseminating the things he’s learned about God and culture at Fuller through his leadership role at Inheritance, a position he took on during his last two years at Fuller.

“Being Asian American, being able to see other things that certain people haven’t been able to see, is why my team and I do all of this,” Daniel said. “If we own our culture and if we own our ethnicity and if we really understand that there’s an intentionality in how God created us, then we have to make the most of it. Asking: What is the beauty in that diversity? What does it ultimately lead to?”

It ultimately leads to the vision in John—where a great multitude from every nation, from all tribes and peoples, are gathered as a beautiful picture of distinct bodies worshipping.