Engaging People of Other Faiths in the UK

I currently hold the post of director of interfaith relations to the Bishop of Birmingham, a city and region which is complex in its “superdiversity,” with citizens from over 185 nationalities and all branches of the major religions represented (and most of the smaller ones too). Consequently, working out how to live as God’s people in this cultural and religious melee is one of the most urgent tasks for the church, yet one that is too often addressed in simplistic terms with appeals to proof-texts with little regard for the depth of scriptural resources we can draw on.

My work often involves giving evangelical Christians a taste of life and ministry in Birmingham, and this usually involves walking down a crowded shopping street where being white and Christian means you stand out and feel very much in the minority. We also visit places of worship, including mosques and mandirs (Hindu Temples), and regularly arrange visits to coincide with prayer time—when there are services taking place, we do not participate, but rather observe neighbors (and friends) of other faiths in worship.

For many evangelicals the visit to the mandir is by far the most challenging. Mosques tend to be quiet and have fairly plain rooms where reading a holy book and prayer is the focus. There is a certain familiarity despite the obvious differences such as the absence of chairs and the almost exclusively male worshippers. However, the mandir is full of color, with people making offerings of food, milk, and money to a range of deities, and the worship time including chanting, bells, burning incense and oil lamps. We are clearly somewhere very “other,” with few points of reference to connect with.

These encounters raise many questions for the participants and evoke a wide range of responses from anxiety to wonder, from confusion to enrichment. Inevitably questions about idol worship and foreign gods come to the fore, with groups expressing a wide range of views and often turning to favorite biblical passages to reinforce their view of what they have encountered.

Goldingay’s article on how the First Testament looks at other religions presents some helpful insights that speak into our current context, and in many ways reflect the questions people have with any form of interfaith engagement. By starting in the early chapters of Genesis, Goldingay highlights, what I believe, to be one of the great tensions the Bible holds for us: the universality of God’s salvation and the exclusivity by which it was expressed through the people of Israel. As he makes clear, other religions are not to be written off as demonic, yet neither are they equally valid insights into the truth about God.

Goldingay goes on to make the observation that, in the First Testament, criticism, and even condemnation, of other religions is focused on their moral and social behavior rather than their belief in the wrong gods. If we accept this premise, then our engagement with people of other faiths can be framed around challenging injustice or unethical behavior wherever it is found, whether within religious groups or in other institutions. This kind of coworking is creating interest between different faiths in Birmingham and leading to interesting projects, particularly around issues of tackling poverty, working with asylum seekers and the homeless. Programs such as Near Neighbours, which is a government-funded projects run through the Church Urban Fund, has done much to promote this way enabling people of different faiths to work together.1

While this can seem like a very positive way forward, the passages highlighted by Goldingay also present challenges for us. He argues that the reason people were not condemned for worshipping other gods was because it was futile since the gods were regarded as impotent and simply could not save. If we hold this belief in relation to the Hindus, Sikhs, or Muslims that we meet, any discussion of faith becomes deeply problematic. One of the criticisms I hear, particularly from Hindus is, “Why are Christians so arrogant in relation to other faiths?” Why do we insist on exclusivity and, consequently, have a focus on evangelism? Clearly biblical texts such as these Goldingay writes about can lead to a belief that we alone are worshipping the one true God, and therefore, to an arrogance or dismissiveness towards the beliefs and practices of others. Gupta’s article on the New Testament sheds some light on how Jesus negotiated this terrain. Gupta points out that Jesus was able to affirm the faith of, and to be seen with, non-Jews or “pagans” without denying or compromising who he was and his message. He cites Moberly’s argument that the gospel of Jesus is not to win arguments against others but to bear witness to life in Jesus.

Learning to speak well of our faith in a way that maintains our integrity as well as making sense to others, and without being critical of them, is a vital and challenging task. This is not to say that we cannot critique or question others, but rather, the question is how to do it in a way that does not simply dismiss sincerely held beliefs that others find enriching and life enhancing. Gupta draws our attention to Jesus’ conversation with the Samaritan woman at the well, highlighting that Jesus did not dismiss her or speak arrogantly, but instead came in vulnerability and engaged in discussion drawing out her thoughts, concerns, and beliefs. Jesus, as Gupta rightly points out, was not compromised (i.e., he did affirm that salvation is from the Jews) because his concern was for right worship, leaving the way open for her to be included in the worship of the father in spirit and truth. His conversation with her is not about contrasting truth claims in order to score points. But is rather the sharing of a rich vision of final redemption.

This story gives us an exemplar for how we can effectively discuss faith with those of other faiths. We can move away from a competitive approach where each tries to prove the validity of one’s own argument to a discussion about the vision for humanity and the world as revealed though different faith traditions. In Birmingham, this approach has been adopted by The Feast2 in its work with Christian and Muslim young people and through the Birmingham Conversations,3 which seeks to create space for people of all faiths to discuss some of the really controversial and challenging issues facing people of faith in society today.

While engaging people of other faiths is a daily reality for many people in Birmingham as well as other towns and cities in the UK, there are still many areas where Christians, agnostics, or secular people represent the predominant groups. Yet through the media, both traditional and social, one cannot but help be aware of the presence of other faiths in our society. How we relate to these fellow citizens will be an increasing challenge for the church. The way both Goldingay and Gupta have engaged with biblical texts is a helpful way for us to reflect on this most vital—and exciting— of tasks.

[2]The Feast is a Christian charity based in Birmingham, seeking to promote community cohesion between Christian and Muslim young people. The Feast is empowering young people to become peacemakers and spearhead social change. See www.thefeast.org.uk. 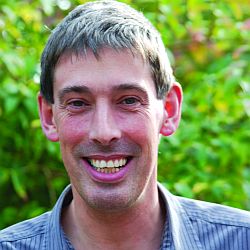 Dr. Andrew Smith is the director of interfaith relations for the Bishop of Birmingham and is the founder and chair of trustees of The Feast, a charity working with young people of different faiths. He has been involved in interfaith work for 20 years and has written and spoken on the subject frequently. He was recently made an honorary lay canon at St. Philip’s Cathedral in Birmingham.