It’s that time of year again. When my wife and I climb up in the attic and drag down the boxes full of Christmas decorations. Decorating for Christmas at the Murrays’ is a several-day event! Among the many decorations are several nativity scenes that we scatter throughout the house. While some decorating (like putting lights on the tree) is tedious work, I actually enjoy putting out the nativities. It gives me a chance to get myself in the right spirit as I reflect on the birth of our savior.

Even though I know it’s not very historically accurate, I am always enamored with the smiling little baby Jesus lying in the manger. Every year as I ponder the Christ child I become overwhelmed by the thought that the same God who simply spoke and created the universe, the stars, the planets, the earth, mountains, valleys, streams, rivers, oceans, trees, plants, animals, and human beings also wrapped himself in flesh and came to dwell among us . . . as a child. Is this the same God who could sometimes be scary in those Old Testament stories? Is this the God who saw human wickedness and wiped the earth clean in the flood? Who sent plagues on Egypt to deliver the Israelites? Who would not let anyone approach him except the chosen Moses? This little baby?

It always strikes me that no one trembled before him on that day. He was born simply, in great agony and pain, wrapped in cloths and laid in a feeding trough in a barn. The almighty God needed to learn to eat, to walk and talk. He needed to be saved from sure death, so his earthly father took him to Egypt. Isn’t it amazing? He could have come in his might and destroyed evil in one mighty blow. Instead, he came in the most humble way. He came in the form of a baby, completely helpless and non-threatening. God chose not to conquer or subjugate us, but to identify with us and love us. He walked among us and, in the ultimate act of humility, he would finally let us kill him. In this unselfish and seemingly powerless act God displayed his awesome power.

The next time you see a nativity—or put one out at your house—take a minute to ponder the Christ child and remember that we have received both the greatest gift and the greatest example (Philippians 2:5-11). Remember to approach others in the way God approached us when “the Word became flesh . . .” Perhaps in this way we can release the great power that God demonstrated when he became a small, defenseless baby. During this Advent season consider the incarnation and how you can live a life of power through humility, love, and grace! 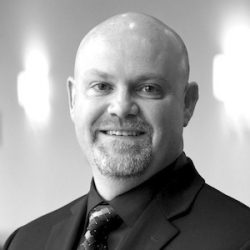 Michael Murray, who earned his MDiv degree in 2003, is the Regional Campus Director of Fuller Texas.