American Beauty serves as a suburban nightmare, intended to provoke. Baby boomer values take a beating. But it does not wallow in dysfunction. Beauty transcends the nihilism of films like Very Bad Things and Your Friends and Neighbors by looking harder and deeper. American Beauty dares to find hope amidst horror.

While Ordinary People introduced the pain behind the picket fence, American Beauty pushes past angst into absurdity. The nuclear families ensconced in this suburbia could easily become comic caricatures. Credit first time director Sam Mendes for keeping the performances funny and believable.

American Beauty opens by borrowing a page from the Billy Wilder playbook. As in Sunset Boulevard, the narrator introduces himself and his death. “My name is Lester Burnham. I’m forty-two years old. In less than a year, I’ll be dead.” Beauty chronicles the disintegration of two families around his murder.

Lester summarizes his uptight, money hungry wife Carolyn in ‘the way the handle on those pruning shears matches her gardening clogs”. As Carolyn, Annette Bening rediscovers the complexity that marked her screen debut in The Grifters. Her Carolyn makes motivational tapes into mantras. Bobby Darin’s “Don’t Rain on My Parade” serves as her soundtrack. Carolyn doesn’t mask her contempt for her Lester. She finds a mentor (and lover) in Buddy Kane – The Real Estate King. They believe, “To be successful, one must project an image of success at all .”

Newcomer Wes Bentley serves as the film’s anchor, the centered, confident survivor, Ricky Fitts. He knows when to cooperate with his Father, Colonel Frank Fitts, U.S. Marine Corps (Chris Cooper in a tough, complex role). He offers “Sir, yes sir” as a form of protection, to buy the freedom to pursue his obsessions–marijuana, making videos and his next door neighbor, Jane.

The film’s title stems from the perfectly manicured roses blooming along the Burnham’s white picket fence. But “American Beauty” also refers to Jane’s best friend, Angela, a supermodel in training. She fuels Lester’s sexual fantasies and sparks his resolve to get in shape. As in American Pie, Mena Suvari plays the beautiful blonde men desperately want. Mendes makes scenes between Lester and the underage Angela appropriately creepy.

Ball’s script places responsibility for Jane, Ricky and Angela’s problems at parents’ feet. The obsessions hidden in the hearts of Beauty’s adults result in violence. Certainly, the latest shootings in Fort Worth force us to wrestle with the problem of evil. Beauty offers a reason for such ‘random’ violence. Ricky declares, “Never underestimate the power of denial.”

Like an artful sermon, Beauty acknowledges evil, but also offers legitimate hope. Ricky explains the ultimate meaning of the film’s title. He talks about a homeless woman, frozen to death, that he captured on video. “When you see something like that, it’s just like God is looking right at you, just for a second. And if you’re careful, you can look right back.” He shows Jane ‘the most beautiful thing I ever filmed’, a plastic bag blowing amidst leaves. Ricky recalls, “That’s the day I knew there was this entire life behind things, and … this incredibly benevolent force, that wanted me to know there was no reason to be afraid. Ever.” In the film’s most stunning shot, Ricky’s eyes gleam before a deep crimson pool of blood. Like Ricky, we conclude “Sometimes there’s so much beauty in the world I feel like I can’t take it, like my heart’s going to cave in.”

American Beauty combines twisted humor and heart crushing poignancy to offer viewers a glimpse of God. That is beautiful. 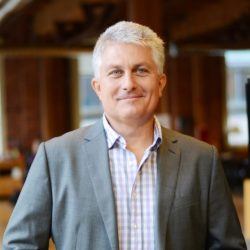