In discussing A Simple Favor, it is worth repeating the old truism: horror and comedy depend on the same thing – surprise. In a horror film, that surprise is usually something menacing, the ever-possible BOO! behind you. We scream, or often laugh, when the tension is released. In a comedy, the surprise depends on our expectations of what should or shouldn’t happen in a given situation. (This is one reason why comedy is so much more culturally dependent than other narrative forms.) We laugh, or sometimes scream, with delight when something unexpected happens. But both genres depend on a careful interplay between set-up and pay-off. So in theory, it should’t be difficult to mesh the two genres, and indeed, the horror-comedy is a time-honored tradition. Jordan Peele’s Get Out (2017) is a recent example. The oldest cinematic example is probably Cecil B. DeMIlle’s The Ghost Breaker (1914), though it is accepted that the first truly successful horror-comedy was Abbot and Costello Meet Frankenstein (1948). The comedy in these films tends to be broad to match up against the horror elements, which are typically supernatural.

Horror-Comedy’s demure sister is the Comedy-Thriller, which tones down both extremes in favor of something much more ordinary. The comedy in these films tends to be related to social mores, and the suspense tends to be firmly grounded in reality. Alfred Hitchcock was the master of this genre, though we now laud his films too highly to often notice their more comedic elements, and it doesn’t help that Hitchcock’s sense of humor is that of a teenage boy too smart for his own good. It’s not simply a British thing though – Americans David Fincher and Paul Thomas Anderson trade in this kind of Mad Magazine meets the New Yorker humor as well, and we most often overlook it, focusing on the suspenseful elements of their films instead. Still, the Comedy-Thriller is a time-honored cinematic tradition.

Horror-Comedy and Comedy-Thriller have an awkward cousin, the Broad Comedy-Thriller, which tries to pair the heightened comedic atmosphere of the Horror-Comedy with the mundane plot matter of the Comedy-Thriller. It’s difficult to get right, because in one moment you have characters acting like normal people afraid of being murdered, and then in the next, they’re cracking wise and performing pratfalls. Even Hitchcock had trouble getting this genre right. See The Trouble With Harry (1955). Three of the most effective films in this genre are Frank Capra’s Arsenic and Old Lace (1944), Alexander Mackendrick’s The Ladykillers (1955)—do not watch the Coen Brothers’ 2004 remake unless you want to see how this dynamic can go very, very wrong—and Stanley Donen’s Charade (1963). I don’t think it’s an accident that two of those films star Cary Grant, because for this genre to work, you have to have an actor centering it who feels otherworldly even when he or she is doing ordinary things, and who’s more transcendent than Cary Grant, a man who, when it was said to him that “everybody would like to be Cary Grant,” replied, “So do I.” 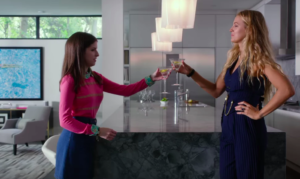 A Simple Favor has Blake Lively, and however uneven other parts of the film are, it’s worth seeing just for her performance as the Übermensch “Emily Nelson.” The film presents her a kind of ethereal being in the upstate suburb where the other mom’s live, but she embraces that reputation of uses it for her own ends. She’s terrifying and alluring all at once, and however outlandish the story gets, you always believe “Emily’s” character and Lively’s performance. It’s a juicy part, and she sucks it dry down to the marrow.

Her counterpart is Anna Kendrick’s “Stephanie Smothers,” a widowed mother who aspires to be the best suburban mom that a woman can be. The plot of this film is twistier than a Red Vine and about as predictable, but it does require “Stephanie” to be honestly herself in every moment and for Kendrick to discover personal resources in Stephanie that Stephanie didn’t know she had until she needed them. Kendrick’s charm helps here here – we want her to win.

As I’ve hinted at, A Simple Favor is somewhat uneven. The comedic elements sometimes—but not always!—feel too broad, and the suspense is a little—but not entirely!—strained. All the pieces, even the annoying ones, do matter in the end, and for that I was grateful. There’s little worse in a movie than enduring an annoying aspect of a film, like a peanut gallery of catty other moms, for example, and having it go nowhere.

A Simple Favor is also fun for its clear love of the kind of Hitchcockian fare I mentioned before. It’s in that tradition right down to the poster and opening credits design. It’s quite a bit bawdier than movies made in the 1950s, but so were the movies Hitchcock made in the 1970s. There’s something to be said for restraint, but this isn’t that kind of movie.