Oscar season is the one time a year most movie-watchers are at least marginally aware that short films are a big part of the filmmaking world. Many aspiring filmmakers produce shorts to both hone their skills and to give potential production partners as a kind of cinematic business card. With streaming video websites, it’s never been easier for you and me to get to see these wonderful little films. A very enjoyable evening can be had perusing Vimeo, a filmmaker’s video sharing site, for surprising and creative short films.

The Oscars also give me an excuse to write about a few short films. Below are brief interactions with the five shorts nominated in the Best Animated Short category for 2014. Briefly and interestingly, three of the five animated shorts are concerned with issues related to welcoming in outsiders, one of them is concerned with how we treat old things, and one of them, in an effort to be funny, just comes across as mean. I’m shocked by the mean one given its source, but I’m more surprised by the thematic resonance between three of the five. The one could learn a few things from the three.

Get a Horse! is the animated short you’ve most likely already seen as it played in theaters prior to Disney’s Frozen. The film features an innovative use of 3D effects to play around with a mimicry of an old Mickey Mouse cartoon from the 1920s. In the film, Mickey Mouse and friends are able to foil the nefarious efforts of a car-driving Pete after breaking through the movie screen into the 3D world and using the 3rd dimension to their advantage.

The short is interesting in the way it allows its characters to play with the conventions of 2D and 3D animation. One might call it “showy.” The point of the short seems to be that playfulness. However, as the short goes on and Pete experiences more and more physical harm at the quick-to-adapt-to-3D hands of Mickey and his pals, the short began to feel a little too mean. The cartoon violence bends toward the grotesque, more like a Tex Avery cartoon than classic Disney, and I eventually started to feel bad for Pete.

To go a little more meta, since that’s the language this short speaks, I eventually felt like 3D animation was given free reign to beat up on 2D. While that may be kind of true of animation in the last twenty years, I don’t have to like it, and I certainly won’t be celebrating it. I guess we’re just not a place yet where 2D and 3D animation can be friends. 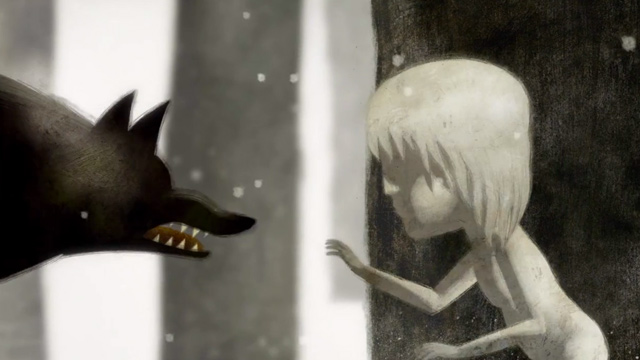 The most visually beautiful of the five nominated animated shorts has to be Feral, the impressionistic tale of a boy raised by wolves and then found and brought into the city to live and attend school. The short is all suggestion and shadow. The imagery morphs with the narrative, and I always felt just a little behind the story like I was understanding what was happening a little after it happened. I loved it. Rarely do animated films so unconventional and mysterious still manage to tell a mostly conventional story.

Short films often tell complete stories in a brief period of time, making them ideal accompaniments to more didactic worship services. Feral establishes mood more than meaning and raises more questions than it answers. It and shorts like it would be ideal features in a worship service centered on the more difficult aspects of a life of faith.

For instance, what do we do about people who refuse love? How do we make room for them in our lives? Is it possible for the more broken members of our society to fit in our programs? What might God be doing in their lives that God isn’t doing in ours? What might they have to teach us about the more mysterious aspects of life?

Mr. Hublot lives in a mechanized world of clockwork precision. There isn’t room in his life for interruptions. However, he is touched by compassion for a little dog he spies from his window, and when he acts to help the pooch, his routinized world is disrupted for the better.

Whereas Feral raises questions about outsiders and hospitality, movies like Mr. Hublot offer answers. The movie lends itself to easy moralizing. Welcoming another into your life will be disruptive, but it’s ultimately worth it. Love is stretching and expansive even if it is painful at times. Those are good lessons, and I don’t mind them much when the method by which they’re conveyed is so amusing. 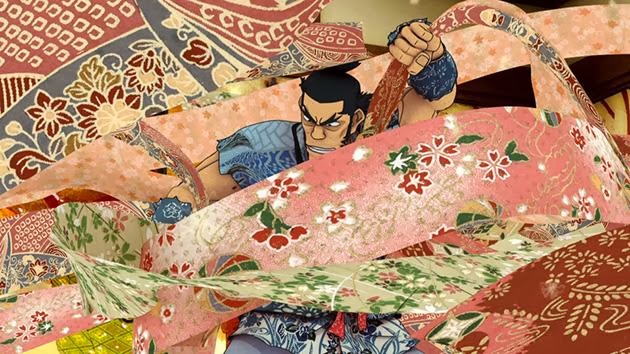 Possessions depicts an ancient Japanese myth in action. Supposedly, objects used for a long time are eventually imbued with personality of their own. A wandering repairman seeks shelter from a storm in an abandoned house full of old things, and the things take advantage of his presence by playing tricks on him. He has to figure out a way to escape their grasp.

Possessions is strangely animated film. The images are beautiful, but they lack texture, and for a film about items, the items don’t ever seem to really interact with one another. For instance, when the repairman walks through the forest, he seems to float on top of the ground though his feet supposedly land on it. Because of this, Possessions is probably my least favorite of the bunch.

I suppose you could see the film as commenting on our material good-obsessed, world-wide culture, like it’s contending that we should find new uses for old things or something. Then again, though they’re a little angry, the objects seem to be doing okay on their own.

Room on the Broom

After viewing innovative animation in the other shorts, Room on the Broom feels pedestrian. Visually, it’s like watching a poorly animated PBS children’s series. However, it more than makes up for that in entertainment value. The film is easily the funniest of the bunch, and the one I most want to watch again.

Room on the Broom features better characters than most live action narrative films. The various characters and their respective foibles are established quickly, and the humor of the short arises from the interaction of the characters with one another. Most animated films are funny when, for instance, the dog chases the cat. Room on the Broom derives its humor from the fact that its cat is stand-offish and its dog is amiable and eager. Their personalities clash humorously.

The film is based on a children’s book by the same name. The short feels like a children’s book, and the ever present narration doesn’t help it feel any more cinematic, though the fact that it’s Simon Pegg narrating doesn’t hurt either. Still, it’s hilarious, and I like anything that encourages us to make more “room on the broom” for anyone looking for a place to sit.

Beginning on February 25, you’ll be able to purchase and view these short films via your favorite VOD service.